If DJ FameMiss was a Spice Girl, she’d be Disco Spice.
I am putting the spotlight/glow sticks/whatever on a lady disc jockey from around the way, DJ FameMiss. DJ FameMiss is not only one of the very few female DJs that you can see performing at local shows around town, she she is one of the few ladies who also helps to put on some of the shows. She is getting her hands dirty in many different departments of the art scene as she has been planting the seeds, tending to them and will soon watch her ideas blossom into awesome electro dance parties/raves.

This Saturday DJ FameMiss will be performing at Too Many DJs, a party that will take place in a huge warehouse out in Indio. She will not only be performing, but is one of the masterminds behind the organization of the party. If you have’nt heard of this party yet, I suggest you do your research and find out where it’s at and come on out to support the only girl DJ in the desert.
As Organic Junk Fude was the highlighted band from the desert’s electronic music foundation, 8 Bit Bandit was my feature artist for the present scene, I now introduce DJ FameMiss, the future of not only the electronic DJ scene in the desert but an inspiration to aspiring female artists all around town… 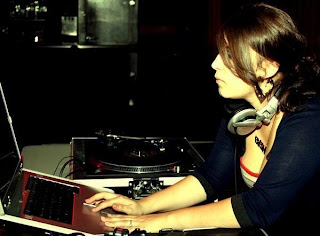 DJ Name: FameMiss
Story behind the name: AJ (AimLo) and I were discussing what to call me one day and I honestly don’t know how the name “Famous” came up, but it did, and we just ran with it and decided to spell it differently. Plus, I’m not really famous so it’s sort of like Fame…Miss, like, missed the fame or something. Haha!!! Get it?!?!!
Born/ Raised? INDIO, CA
What inspired you to be a DJ? I LOVE music. I was in choir and a bunch of different musicals all through elementary and middle school. I was also in band, played the Clarinet and the Flute, in both middle and high school. And I’ve always thought I could sing pretty well. I fell in love with electronic music and it sort of just fit my style. Plus, the first two records I ever mixed matched perfectly, and I knew it was meant for me. Oh, and a little inspiration from AJ (AimLo) helped too.
What kind of music do you spin? Electro, Minimal, House, Drum & Bass. And I’m starting to get into more of the basic Electronica, Nu Disco stuff.
Who are your biggest inspirations? AJ, of course. And Daisy O (LA) and Gina Turner (LA) are probably my biggest influences right now. They’re living my dream.
When did you start DJing? I first learned the basics about 3-1/2 years ago but I very rarely touched the turntables at that point. I just had too much going on I guess. I started getting really serious about it last summer, so about a year really.
How is it being a electro DJ in the Coachella Valley? It’s definitely difficult. I can’t imagine how the artists out here who came before us kept it going. This place is so small and it’s not easy to get people to come out and support these events. But it’s grown so much in the past few years, it’s unbelievable. The scene is great now and I only see it getting better from here. Although, it’s unfortunate that enough people aren’t supportive of others. I mean, I’m at every event…Hip Hop, Drum & Bass, House, Rock, everything. If everyone involved in the scene did that, the valley would be a lot more fun.
What are the pluses to being one of the few girl DJs in the desert? It’s pretty cool. I mean, people know who I am, they respect me, they want to hear what I’m up to. I’m sort of in with the boys more than most, I guess you could say. The first time I spun at Smash Fridays, I opened at 9pm. The room was packed…At 9pm!! It was unbelievable! And I was so nervous. But I thought it was great, I mean all these people had come out to find out who this girl was on the flyer. And since then, I’ve heard nothing but good things from a lot of people.
What would you like to see more of at parties? PEOPLE!! Everyone complains that there’s nothing to do in this valley but then when someone gives them something to do, no one shows up!! Get it together!
Accepting applications for backup dancers? Hahaha, always. But you have to wear pink spandex. It’s a requirement.
What projects are you currently working on? I’m working on the final details for our next EMA event on August 23rd, which I’ll be spinning at as well. Aside from that, I’m currently getting a mix together, a Minimal mix most likely, that should be out and about sometime in the near future.
Can you tell me about the DJs that will be playing this Saturday? AimLo will be LIVE LIVE LIVE on the MPC, all original music!! Enough said! Classic Cult is young, fresh, and extremely talented. PacMan, JF//Discord, and Johnny DJ have been around for a long time and really know what they’re doing. SikRoy is returning after a break from the DJ scene. And as for yours truly…I’m the only girl. Ha!
Where can we find you on the internet? Myspace.com/djfamemiss or djfamemiss@hotmail.com 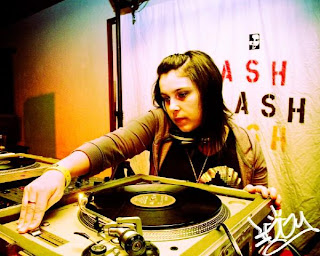 Dj FameMiss (aka Ash or Ashley), great photo by Iggy 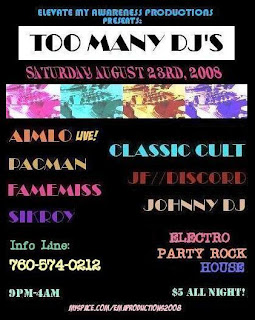 The party that DJ FameMiss helped put together 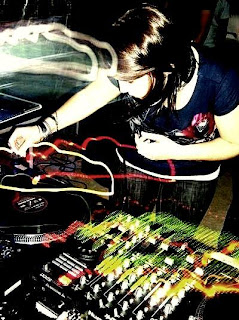