GIRL OF THE WEEK: Symara Stone

If Symara Stone was a Spice Girl, she’d be Songbird Spice. 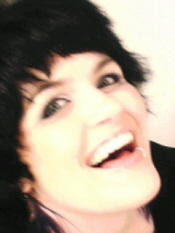 Name: Symara Stone
Sign: Cancer/ Leo
Where were you born? Raised? Palm Springs, CA
I heard you were in an all -girl band at one point, tell me about that.
While I was a Junior, I formed an all girl band called Inamorata with a couple of girl friends of mine. We were a rockus four piece band, and wrote songs about “that time of the month!” We were influenced a lot by Sleater Kinney and Veruca Salt. The band shifted and became a little more adult when we added a cellist, violaist,bassoonist, and some new members to the whole mix. After everyone went off to college( even me for a short period of time before I decided that it wasn’t my thing), I started writing a few theraputic songs for myself. One song turned into three or four, and three and four turned into a twelve song album. I have never had the proper recording equipment, but to me that doesn’t matter. What matters is that I expressed myself, and that I can still remember all of the songs.
I understand you are a one-woman show now. What instruments do you play?
When I play shows, I usually just play an acoustic guitar. Its not intimidating and over the top. I do play piano though, and would like to add the harmonium to my set, eventually.
Describe your sound.
My music has no fuss. Its simple. Its indie pop/soul/jazz/rock. I think it can appeal to everyone. Most of my songs right now are generally about heartache; falling in love with the wrong person. Some are about my physical insecurities, and dealing with what society forces girls to look like. Others state my opinion about how we need to wake up as individuals, and change our ways of thinking and act accordingly.
What inspired you to go into music?
My Grandmother was a pianist, and my Mother plays piano and the cello. Every night before bed, my Mother would play Debussy before I slept. I don’t think I have actually gone into music, yet. After all, I still work my day job, but my family has a big influence on me. I wouldn’t doubt that I inherited some of their musical talents. When it comes to the guitar though, if it weren’t for my step father buying me my first guitar, I don’t think I would have ever taught myself to learn. Every guitar I have he has given me. He has been one of my main supporters in my recent songwriting adventure. He is an artist/teacher/jazz guitarist, and has three bands of his own ( including a big band in temecula with a brass section and the whole works.)
Who are some of your greatest influences, musically?
I’d have to say in contempary indie bands and solo artists, Rilo Kiley, Elliot Smith, Ani Difranco, and Azure Ray. As far as the past goes, Billie Holiday, Ella Fitzgerald, The Beatles, Joan Mitchell, The Beach Boys, Jefferson Airplane, and Led Zepplin. There are so many artists out there though that I am influenced by. Music is a great form of self expression! It speaks to everyone on a global level!
What projects are you currently working on?
I’m working on another album called Indigo Child. I don’t put a time limit on my art. It may take me ten years to produce this. This is my spiritual awakening album. So I know there needs to be room for growth.
I’m also trying to get a band together so I can perform my songs at other venues besides coffee shops. Don’t get me wrong the coffee shop atmosphere is great, but I want to ROCK OUT!
When is your next show?
October 4th and 11th, 2008
At Shenanigans @ 9:30 PM
3700 E Vista Chino, Palm Springs, CA 92262(760) 322-6726
Where can we find you on the Internet?
I’m currently in the making of my own website, but for now…
www.myspace.com/symarastone