A Night In Coachella – Part 1 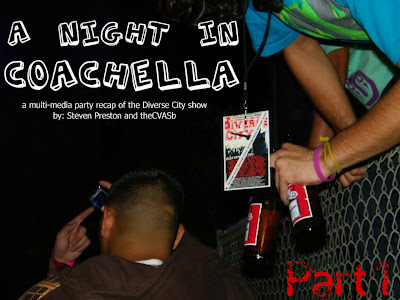 I knew it was going to be a long day when I decided to drive out to Thermal at 2 in the afternoon last Saturday, the 18th. It was the DiverseCITY Mini Festival, and the first band, Courtesy Knave was scheduled to go on at 3:30pm, so I thought I’d get there early to film a little before the band got on. I had volunteered to film the festival, and put together a project about the day, but when I got there, all I found was a couple of sound guys setting up and an empty desert.

I waited around for a few hours, quickly realizing what was happening, and guessing what was going to happen for the rest of the night. The first band to show up was Sol District at around 5:30pm. They were scheduled to play at 6:30, at this point no one had performed yet. We waited in the parking lot, drinking beer while the sun set until finally the first band took the stage, The Ashram Housing Project, with promoter Joaquin Rose on drums. They were standard California rock, little bit of reggae, little bit of Spanish rock, a Coachella Valley sound. Few people were there at this point, sometime around 7:30, but they were starting to file in. Pterodactyls followed them, and after, Mira La Luz. Both bands performing well within their genres, doing what they could in somewhat of an awkward beginning. It didn’t help that no one knew the actual set time or band order, since some had dropped out, and others still hadn’t shown.

DiverseCITY – Part I from Steven Preston on Vimeo.

Soon enough though people did show, music started going at a consistent rate, people were starting to mingle and have a good time. I have to also mention my first encounter with Classic Cult; this will become important later in the story. A young kid wearing a flashing set of Mickey Mouse ears came up to me and began talking about the festival, I asked him who he was there to see and he said, “Classic Cult.” He soon informed me that in fact he was Classic Cult.
After Mira La Luz, Apollo came on the stage and worked the crowd a little bit, he was very adamant about the crowd moving to the front. Apollo performed well, with style and substance, I enjoyed him, and he entertained the building crowd as people began to get more into the spirit of the festival. I was waiting to meet up with Sarah and Raphael, of the CVASB so we could do some interviews, and at this point I thought maybe tonight is going to turn out all right after all.

Words and Film by: Steven Preston