A Night In Coachella – Part 3 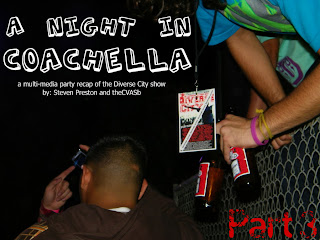 Once again, I found myself lost. So lost that I ended up on Bagdad street. A street that I really didn’t want to be on, for a variety of reasons, many which I am sure you can figure out.

But it was all good. After a couple loops around, rounds of shots, and shots at different spots, we finally pulled up to the party. A house party that is. My favorite kind.
Before we had the opportunity to even enter the party, we were greeted by all of our friends who were directly outside the house, in the street, having an elaborate tailgating session. It appeared to be that the tension from the Diverse City show was still carried over from the artists to the after party.


Regardless, the tailgating part of the party was fun. It was cool to actually chat it up with some of the local artists and bands, even if there were some uneasiness. Conversations ranged from Sol Distric being not able to jam out and rock the house party (major bummer), Sarah Palin, politics, and my red Members Only jacket.
In the midst of one of the heated discuissions on voting, hope, change and Barack Obama the conversation was put to an aburupt stop – the lead singer of Soul Opus, Mike Reyes, came up and announced to the tailgaters that they were going to be taking the stage any minute.
Right before Soul Opus went on, in the heat of the moment of everyone voicing their fustrartions Steven Preston and I were able to catch an interview with Mike Reyes. A lot was thrown out on the table, in a verbal sense.

With that being said, I was very intrigued and interested to see Soul Opus’s live show and we headed into the house party to check them out.

After a night somewhat filled with fustration and disapointment of not being able to see some of my favorite bands/crews, I was really happy and appreciative to catch Soul Opus’s set. The positive vibe of Soul Opus’s reggae inspired sound invited all the party guests to forget their worries, get in their zone, and just feel good.

The crowd was very energized which made this house party extra fun. I was very impressed by the musicianship of each member of Soul Opus. They are definitely rock stars. 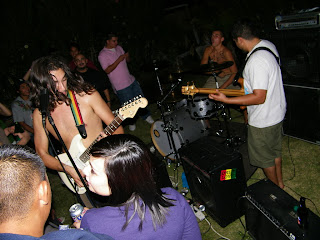 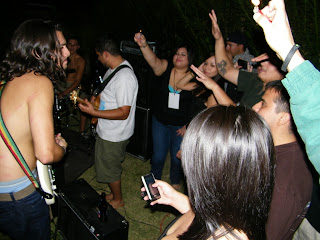 All was fine and dandy in the steady flowin’, positive vibin’ Soul Opus party untill someone steped up to the band and told them that they just couldn’t take it anymore – it was their turn to play and they wanted to go on.

Classic Cult got the hint and walked off stage.

But, no worries, there were no hard feelings, all is fun and games in the CV party scene.

We hung around for a bit more, the clock hit 3:00am and everyone started saying their good-byes.  Soul Opus wraped up their set, put their equipment away and thanked everyone for coming out to the party.  Everyone in return thanked them for saving the night.
As Steven Preston, Alf Alpha and I walked to our cars we laughed as we reflected back upon some of the funnier moments that took place throughout the duration of the night.  It was most definitely a unique night, a night that could only take place in none other than the Coachella Valley.  And there the story of “A Night in Coachella” was born.