When Slipping Into Darkness ended their set the crowd dispersed and Alf Alpha made his way to his tables to play a set that wound everyone down. It was late at this time, around 1:00am, or so, and some people had to go. Steven Preston was one of them. As Macroscopic was preparing to get their set started in the art studio Steven Preston started up his car, drove it off the sidewalk and packed up his equipment. He came back to the bar, which was just about out of everything except food, and said his goodbyes. I thanked him for coming, snapped a polaroid of Steven, and the ladies from Frances the Farmer Organic Catering gave him a nice plate of food. We briefly talked about the success of the party, the unexpected attendance, and how fun it was going to be to look over the footage later…

A lot of people of people left, but a few came back inside the studio to watch some of the last sets of the night: Macroscopic and Pheo. It was a smaller, more intimate crowd by this time, perfect people to close the night with. 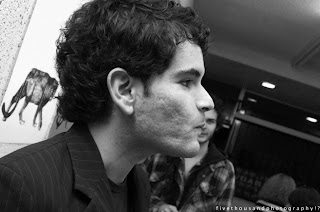 After Macroscopic finished their set, Alf Alpha, Speak and Pheo performed a chilled out set before we turned off the lights and went home.

We closed up shop around 2:30 am. Took a bunch of polaroid pictures with Johnny 5000 before he left and thanked him for coming out.
We hung out in the studio for a couple more hours, ate the left over food, and laughed about all the crazy stuff that went on that evening. We all agreed that despite the fact that we were all working, it was one of the coolest parties we had been to in a while. The night was a success and I am already looking forward to the next one…

Thank you to everyone who came out!
Special thanks to:
The Date Farmers
Alf Alpha
Slipping Into Darkness
Sailor on Shore
Speak and Pheo
Sand Like Snow
Macroscopic
Words and color pictures by: the CVAS blog
Video by: Steven Preston
Photography by: 5000 Photography