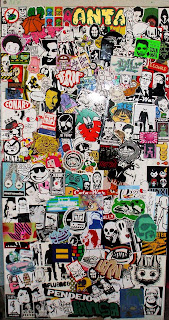 Hmmm. Before 2008 there were shows going off left and right. Right and left. Then – BOOM!. 2009 hit and I think everyone got a little burnt out. But, no need to fear… good times are near. I have been in contact with some party promoters, organizers, artsists and bands, and they have quality over quantity in shows for you. And hey, I mean, these musicians aren’t machines. You don’t want them to get too burnt out too quickly. We’re in it for the long haul.

So, like I said, good times are near. And they are closer than you think. For instance, last night at The Point after was crackin and tonight at Ignition there are going to be some solid open mic acts performing. Then the next night you have two options you can return back to Ignition or venture to the wild side… Rancho Miarge (dun dun dun). Indie rockers, Technicolor Wolves (your vote for best new band), Riptorn, Cakes and Brains, and Save the Whales will be joining them. Then, Sunday night, in the spirit of MLK, if you want to go out of town, the desert locals, The Monopoly will be playing at the Whisky A Go Go. So go go…

And always keep in mind that if you don’t like what you see here, then scroll down and make sure to check out the FREE: Films, Events, Music feature that I post on Wednesday.

No flier. Just know that Andy and Bolin of the Pterodactyls, Tyler of Sand Like Snow and Symara Stone will all be getting on the mic at Ignition’s Open Mic Night. 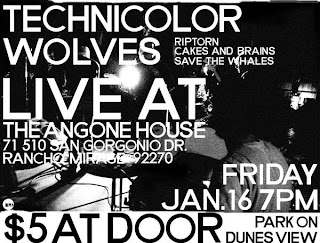 These guys were voted as the Best New Band of 2008. So, go to the show and see what they are all about, if you havent already. And, how cool is it that it’s a house party in Rancho Mirage?? I like that. Whose mom went on vacation? 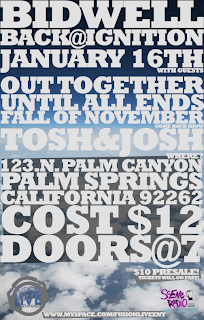 So, this show might be a little on the pricey side, but maybe it will be worth it? I guess you will just have to go. All ages. Doors open at 7:00pm.

SATURDAY NIGHT:
=( nada. go watch a film at the film fest. or go drive around in a car with all your friends. even though that’s not green friendly…
SUNDAY NIGHT: 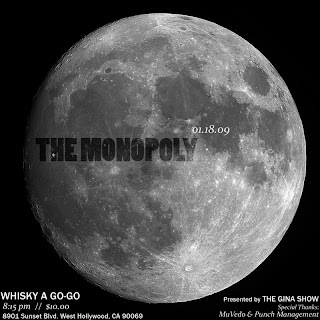 This could possibly be your Get Out of Jail free card! Take advantage of it before it is too late. Those damn LA kids.
Let me know if you dont see yoru party up here at thecoachellavalleyartscene@gmail.com