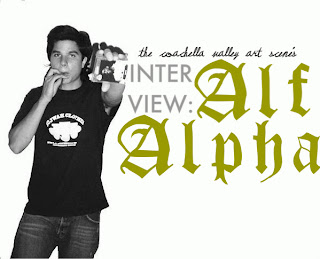 Alf Alpha was one of the first artists that I had the opportunity to interview here on the blog. At that time in his life, Alf Alpha was just making the transition from doing local shows in the desert to branching out to gigs in Los Angeles. He had just linked up with the Date Farmers and had landed in internship with the producer of the N.A.S.A.. It was an exciting time to catch up with him and get him some exposure on the blog.

Months later down the road, Alf Alpha and I meet again for another interview. Again I find Alf Alpha in another pivotal point his Music Producer/DJ career. But this time, the stakes are higher. On bigger and grander scales. And just when I thought the sky was the limit last time, Alf Alpha stepped up his game and has pushed the limits even further.

It has been fun and exciting to follow Alf Alpha from when he would DJ local gigs here in the valley when he was going to COD, to most recently going out to LA to accompany him at shows at the Hammer Museum and New Image Art Gallery. Watching an artist evolve and find their niche is a really fun thing to experience and roll with.

I think Alf Alpha is a great example of someone who truly loves what they do and they do it to the best of their ability. Alf Alpha has never taken no for an answer, and the best thing is, he never doubted what he was doing along the way. And that is why I admire him and thought he would make a perfect person to interview this week on the blog.

This past Friday Alf Alpha released his first official solo project on a record label, in Japan. The album, Jump Wildly About, may sound familiar to some of you. This is because Alf Alpha had self released 200 copies of the album. Each one hand crafted and spray painted on. They were awesome treasures for anyone who knew what was up and got a hold of them. Most of them, probably more than half, were sold and traded with other artists in the Coachella Valley.
Well, now that same album is sitting in one of the biggest record stores in Japan. And is on Japanese iTunes.

But, that’s not even the best part. The best part is that in addition to having his album released in Japan, his record label also set him up with an interview with Waxpoetics Magazine, Japan Issue. It just so happens that Waxpoetics is Alf Alpha’s favorite magazine of all time and subscribes to the American version of the magazine already. So, to get an interview with Waxpoetics and have an advertisement for his album on the pages was a dream come true.

When I had first gotten word of all this news, my first thoughts were that I had to share this with the rest of the valley.

So, without further ado….
I bring to you…
Alf Alpha. 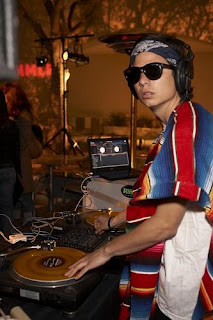 So, tell me the story of how this Japanese label found you.
Alf Alpha: I got a myspace message from the label. They liked my music I had on my page. I sent them my first demo and some of my new material.They compiled 18 of their favorite track and decided to release it.
Interesting. Why Japan? Why do you think they took interest in your music?
The label is called Yanase Productions INC. I think japan is really cutting edge when it comes to technology, art, fashion, and music. I am not sure what got them interested in my music. I am very honored that they have embraced my music though.

This cover art is really cool. Who did the cover art and how do you think these images relate to you and your album?
The cover art was made by Japanese artist 2yang. I really love the cover. I think he did a great job. I like how it pays homage to the old school. The skateboard wheels, casset, and sunglasses give it my personality.
What can you say about the songs that they chose for your album? When were they made… what kind of beats are they?
The album is my mostly instrumental. It features some of the first music I ever produced and some of my recent production. I like to keep my production eclectic.
When did you start producing music?
I started producing right after I graduated from high school. In my freshman year of college I sold my car and bought my first drum machine. It was a Roland SP 808.
So, to get the record straight, all 22 songs on the album are all instrumentals?
The album features a remix that I did of Afrika Bambatta’s Planet Rock and the interludes have spoken words, but for the most part. It is an instrumental album.
I think your music has both newness and nostalgia.Are you conscious in this?
I am aware of it. I am influenced by both old and new music. When I produce my own music I like to incorporate some of my musical influences.
What you keep in mind when producing your music?
When I am in the studio working on music my main goal is to be always be original and always be myself.
What inspires you?
I get inspired through art, travel, and personal friendships.
Is there any artist or song you want to remix?
I’d like to get to work with the super villan, MF Doom. I’d make a really grimey-ass beat for him.
Where can somebody in The US purchase this album?
You can get it imported from Japan or Itunes. Check my website.
Have any other countries shows you love… in regards to releasing your music the same way Japan has?
Yeah, I was recently hit up by some labels in Europe that would like to release my music. I am exited about the idea and am currently working on that.
Cool. Besides releasing your album in Japan this Friday, what else are you currently working on?
I have been really busy DJing recently. I look forward to getting in the studio and working on new music. I am in the process of updating my website. I started up a the blog www.NoToysAllowed.com I am always working with The Date Farmers and look forward to upcoming art shows.
Spekaing of DJing alot recently, I heard that this past week you DJed at the Hammer Museum for the Flux film project. I saw that NASA was debuting their films, Date Farmers, and Kanye West’s video premier was shown. How was that event?
The event was really fun. I really enjoy Djing art shows. N.A.S.A and The Date Farmers debuted their new music video. It was my favorite video of the night. I can wait for the world to see it. There was a rumor that Kanye was coming to the event. I didn’t realized he was standing by the DJ booth until I finish my set. I heard he was feeling the my set.
I don’t doubt that he was. Looking at your most recent gigs, looks like your are the ultimate art show party DJ. How is this crowd different from others? Why do you think you’re so compatible with them?
I love playing art shows because I get to play all of my favorite hand picked music. I like setting the mood for the evening.
What is the difference between DJing and making music for you?
When I am DJing, my responsibility is to set the mood. And I take responsibility in creating an atmosphere from vibes I get from people. Every DJ set is unique to every crowd.
When I am making music, I am making it for myself and not necessarily trying to please anyone else. I create my own sound. 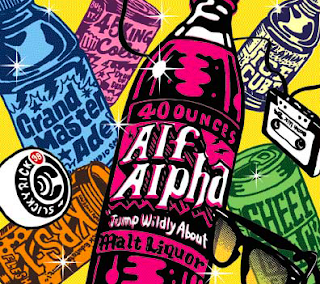 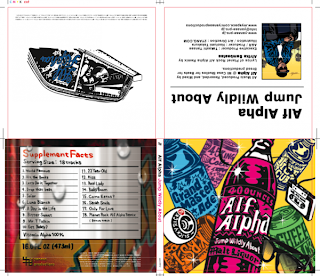 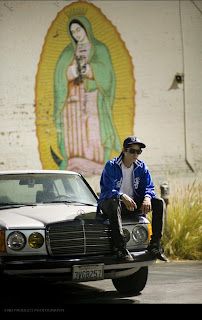 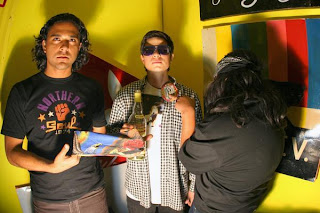 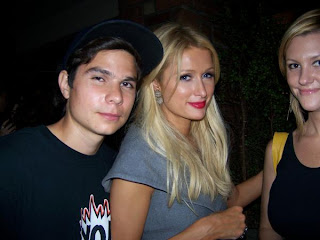 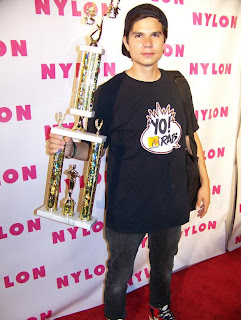