The Themselves Party Recap 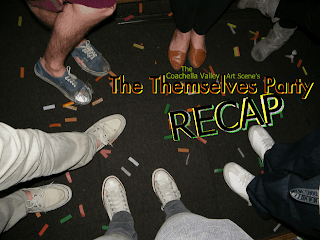 A multi-media story tale by
Sarah of the CVAS blog
This whole story started a couple weeks back.
Jay of Aesthetic Arrest had contacted me and said that he would like me to host the party that he was going to be throwing. He told me that he had booked Themselves, The Sufukatas, Griefshare, Organic Junk Fude, Provoked + Dialect, Planet Lunch, Freshmess, and Alf Alpha. How could I say no?
Next day the party flier was released and word started to spread like wild fire.
…
Night of the party, I was chillin‘. This wasn’t a Date Farmer Art Studio party, where I’m usually running around or bartending. I got to actually just kick back, relax, connect with all the desert artists that came through, which was amazing and so much fun. All I had to worry about was charging my forever dying battery and decorating the Sky Box Room.
…
Me and Alf Alpha rolled up to the party ready to party.
First people we kicked it were was FreshMess. We all helped each other set up the Sky Box Room. The boys handled the technical stuff and us ladies handled the decor. I had hit up the 99cent store earlier that day, so I came prepared with some part favors.

Shout out to DJ Famemiss for helping me blow up all the balloons.

Room is looking good, then, next thing you know… we get a call that Organic Junk Fude is not going to be able to make it. Bummed because I was really looking forward to seeing them again after all these years. It’s all gravey though. The CVAS blog had a backup plan just in case anyone couldn’t come through.
My good friend, and one of my favorite MCs, Speak was already in pursuit to the party. He was gonna rock a small set with Alf Alpha in the Sky Box room, but I thought I might ask Jay if Speak could just take the main stage….
Jay was down.
So I called up the 34th best rapper alive, Speak F. Baby, and gave him the 411. Sounded like a good plan to him. He’d be at the spot in about 30 minutes.

In the meantime, Planet Lunch is killin‘ it on the the turntables.

Dude was playing MF Doom, Count Bass D, Madlib, Flying Lotus. Notable song selection to mention Accordian by MF Doom. Thank you. It was so refreshing. Oh, and did I mention that Planet Lunch plays vinyl only? Rad.

The crowd was starting to fill in. Everyone was just drinking, chilling, socializing…. having a good time….

Next thing you know, I get a phone call. It’s Speak F. Baby. Alf Alpha, his DJ, got the tables ready.

The man walked into the show with a lady on each arm, a microphone, and a tambourine.

The man left the spot with two girls on his arm, a microphone, a tamborine and props from everyone.

Alf Alpha was killing it on the tables during the intermissions between Speaks set and Provoked + Dialects. He was holding it down as he djed for both acts.
The first jam Alf Alpha played was RBL Posser – Bammer Weed.

As I am saying goodbye and thank you to Speak and his entourage, as they depart back to Orange County, Daikon Eklectic comes up and says what’s up…

We all decide to go outside. As I wave by to Speak and the gang, Daikon offers me a little spin in her ride.
Now, my Mom taught me well… ya know… never to get in a car with a stranger (although Daikon is no stranger), when I saw these bumper stickers on her car I hhhaaaddd to make an exception to the rule.

Alex of Daily Dares and a 1984Rat just happen to be in the backseat….

What? Daily Dares doesn’t like M.I.A.?? That boggled my mind. But I respected it.
Looked at my cell phone and it was time to head back into the show.

The merch tables were looking good.

Alf Alpha was playing his last couple songs as we returned back to the party. Provoked and Dialect were preparing to take the mic.
On my way over to the stage I ran into Planet Lunch and gave him props for his set earlier that night. Planet Lunch hooked it up with some stickers.
Check out how dope they are…

Thanks. And I got your Vice magazines + other swag, don’t worry.
Microphone check 1 – 2- 1- 2… Provoked and Dialect hit the stage.

Dialect (photo by soleconcepts photography)
What I like most about this duo is that they compliment each other nicely, Provoked has that smooth sense of style on the mic and Dialect has that direct, authoritative swagger. I’m looking forward to their collabortaive album that should be released soon.
As they were closing their set, I ran upstairs to the Sky Box room. Who do I see killing the dance florr, but FreshMess!

Alf Alpha head down the dancefloor upstair while downstairs was an entirely different experience.
Griefshare took the stage. His music is truly intriguing.

(photos by jodi)
It was an amazing performance as he opened up for some of his biggest musical influences, Themselves (Anitcon), and got teh crowd hype on the headlining act.

Next up was The Sufakatas. DJ Odyssey on the turntables?!?! Saaayyyyy wwwhhhaaattttt….. This dude is a legend.

I was excited to see The Sufakatas. This was going to be my first time seeing them perform….

The dudes killed it. I really love how raw they are. There is no better word to describe them, then raw.

By this time into the party, everyone was feeling good. The crowd was getting more and more crowded, the drinks were flowing, and everyone was just a tad bit anxious for teh next act up…. Themselves.

Themselves took stage and the crowd exploded. The photographers had a field day. And my battery finally died. Sorry for the no video. But, those who went know whats up. Here are some pictures from my photographer friends…

Show was a success. Special thanks to Aesthetic Arrest, Kill x Will, Themselves, The Sufakatas, Freshmess, Alf Alpha, Griefshare, Provoked + Dialect, DJ Odyssey, Speak, The Point After crew,