Come Sunday morning, you’re bored. What’s there to do?
Johnny, of 5000 Photography, has the answer to that.
Come bike with him. And his other 20 bike-friendly friends. Not all of these people know each other, not all of them are profesional bikers, and not all of them wear those biker spandex (although some do wear fake mustaches).
They are just a bunch of people who are getting together to ride some bikes. Free, fun, and fitness. Easy does it.
Biking is the new chillin’. Everyones doing it.
Next month, next Sunday, be on ethe lookout for another Bike Party coming to a town near you.
Here’s what went down this past Sunday: 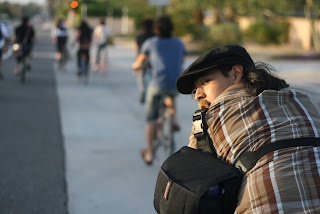 So where did you get the idea to start these bike ventures?
A few friends and I get together all the time to ride around the valley, so we thought it would be interesting if we could get more people to join us. I’m on my bike everyday and I see more and more people on two wheels, I thought this is the perfect time to organize something.

When do you plan on having them?
What I have in mind is a big ride on the last Sunday of the month starting off at the same place then eventually change the routes and locations to keep things interesting. (I also want to do a Fast Friday, for the more experienced riders who want to go FAST!) 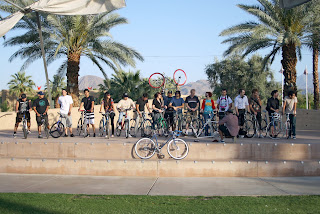 Can anyone come out? Do you have to have a special bike or anything?
Yes ! I want everyone who has a bike to come out and enjoy the ride with us. On our first ride we had people with all sorts of bikes; beach cruisers, road bikes, mountain bikes and fixies. I dont want anyone to be discouraged to come out because they don’t have a certain kind of bike. 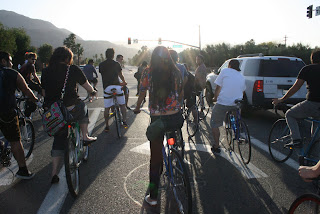 Tell me a little bit about the routes you take. Are they hard? How long… etc
The route is not difficult at all, any level of rider would enjoy it. It starts and ends at the same place for practical reasons. You can see the route here (http://www.somethingmoredelicious.com/2009/04/moustache-ride-gps-track.html) its about 15 miles and is slow paced and we have plenty of stops, it took us about 2 hours from beginning to end. 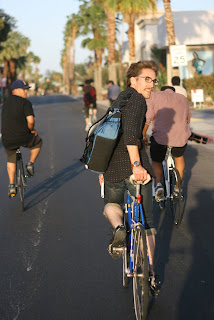 How many people came out to your first event? Where were they from? Were they experienced bikers?
There was 23 people that showed up from all over the valley, some of which I have never met before. Some were experienced cyclists while others were just weekend riders. It was cool to see so many people on the street, instead of the usual 3 or 4 cyclists. 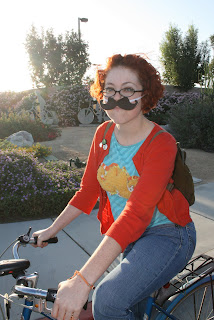 What do you predict the next one to be like?
I think the next one is going to be even better! This was the first attempt so i felt that we were just testing the waters. There are definitely more people interested this time around, I want to at the least double our numbers for the next event. 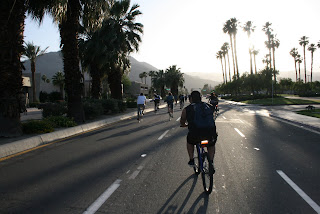 Who do I contact if I wanna come out to the next one?
You can contact me on myspace or send me an email. 5000Photo@gmail.com. 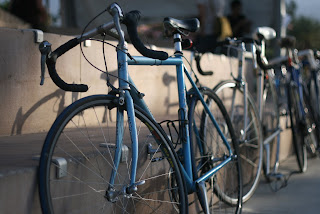