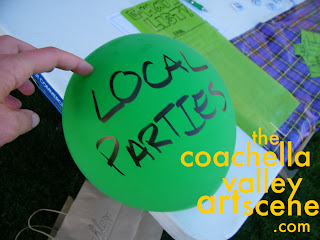 This past weekend was a lot of fun. And it was just as much fun as it was productive. Those are my favorite kinds of weekends. I had such a fun time being productive that I wanted to share it with the rest of you. Check out some things that happened around town that you might have missed this past weekend.

1st thing I did on Saturday morning was go up to the High Desert. Actually, I went to Morongo Valley. So… is it safe to say High Desert? Or is Mid Desert better? Anyways, went up to Morongo Valley to hang out at the Cactus Mart and get a grand tour of the facility. At the Cactus Mart they have an amazing Hardware store in a GREENHOUSE! It’s so awesome, it’s totally worth the drive. And let’s not forget about the very cool art gallery, The Purple Agave Art Gallery, that is located inside the Cactus Mart. It features all local artists and all sorts of different types of artistic styles. A must to check out.

While at the Cactus Mart I called up Steven Preston who recently moved up to Morongo Valley. I wanted to check out his new pad up in the canyons. The journey to get to his house was a long, adventurous one, but well worth the excursion. I got to meet up with the whole California Soul crew. Got to see where all the magic happens. And also got to see some sneak peaks on new projects that Steven Preston is working on…. super cool/rad/awesome stuff. After a nice little chill session the clock ticked 3:00pm and I had to leave down to Coachella for my next adventure of the day…

I arrived to Dateland Park in Coachella, CA at 4:30pm. I was asked to come by Provoked, who helped put this community event together. It was an event for the locals to put work out about a 1,000 foot wall that is across from the park. They want to do a hhuuggee mural and they are looking for local artists (from all over the Coachella Valley) to help them out. I thought that was really cool so I had to go and support. I showed up to the event and they had it set up nicely. It featured everything from graffiti artists, to skate shops, to corn on the cob, to art, to hip hop MCs, to the CVAS blog, to S.C.R.A.P. gallery. Just about everyone had a booth out there. It was really chill and layed back. I even got to shake the Mayor’s hand. Pretty rad.

My family always comes out to support the blog. That’s my brother on the left. That’s me on the right. And that’s the Coachella Valley Art Scene table that we are sitting at. And those are funny glasses that I photoshoped into the picture. At this booth I was able to talk to people who had, and had not, visited my site. It was cool being able to connect with everyone and talk about something that I am really passionate about.

Some local artists doing it.

Big up to Anta for hooking it up with a piece. He gave me one of his Ninja Turtle prints. Muchas Gracias Anta!

This is my favorite picture from the event because you can really see how nice the set-up was and how chill the people were who came. It was all for the arts, all positivity, all smiles on everyones’ faces.

Provoked was the MC for the event. He did an excellent job! He kept everyone informed about what the event was all about, was the comic relief, gave all the shouts, performed, basically he kept everyone entertained and the positivity levels up high the entire 5 hours. The man is a definite community mover.

Alf Alpha was the DJ! He played the bangers. The chilled out Saturday afternoon music was in full rotation. As you can see there are two bikes in the picture. Those were donated by the Boys & Girls Club and were given away raffle style to two lucky kids. =)

There was live graffiti murals going all day long. In the very back of this photo you can see a part of the 1000 ft wall that they are looking to do the mural on. I thought it was cool how the city of Coachella let the graffiti artists do their thing. A of of people sat down and watched the artists go at it, it was like a live art performance or something. Very cool.

Showed up around 11pm at J. Dee’s Landing. I took a couple pictures, but none summed up the night quite like this one above the text. I also took video of some of the band’s performing, but I will upload those soon. I really enjoyed the show, there was a lot of good talent there. And an even better crowd. It wasn’t crowded, but, it was one of those nights when all the right people show up and somehow that is more rewarding. Know what I mean? If you were there I guess you would. Anyways, it was an amazing show. So amazing that everyone wanted to have an after party. Sounded good to me! Before I headed to the after party I had to make a stop at the taco place on Ramon Road that sells the bomb burritos until 3 in the morning….

After party was at Daily Dares’s house. It was a banger! Partied with the out-of-towners, No Paws No Lions and the fashion designer, Supa Hype. In the back of the picture is Mr. Johnny 5000 and Daikon Eklectik.

We shot some hoops, sang, and warmed up our toes by the campfire. 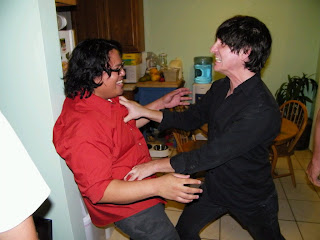 I don’t think I am going to comment on this picture. You can make up you’re own story behind this.

Around 4:00am I found myself crawling into bed.

Next morning (afternoon to most) I woke up with a phone call from Alf Alpha. We met up at Ace Hotel. Had a little booze at the Amigo Bar. Click the picture to enlarge. Obviously my drink was a little strong, it’s a bit blurry, but you get a sense of how cool the bar is nonetheless.

Once we dipped out of Amigo Bar we took a trip up to DHS and had a chill session in the middle of the desert. Maxin’ and relaxin’ in the photo above. Mini-photo shoot then we hot up the best thrift stores that DHS has to offer. I swooped on a tons of home decor and photography books… and as you might have guessed it, Alf Alpha was digging for rare records the entire time (hours to be exact).

All in all, it was all good.