What I like most about the Coachella Valley’s music scene is that it’s diverse. Especially when you consider the size that we are working with. There are little pockets of music all around the valley. And in each of those different music pockets, there is a scene that is making a scene for themselves. No matter who, what, when, where or why… everyone supports the people who help build the scene up. That’s the desert charm for ya.

So, when speaking of all those little pockets of music, there are some that certain people might not even know about. For instance, I will be the first to admit that I once knew very little about the sub-culture, metal music scene out in the desert. But after starting this blog, I started to step outside of my comfort zone and learn more about it very quickly. I thought since I needed a little schooling on the subject, others did too. So, the first guys I reached out to to learn more about this genre of music and the history of it’s upbringing and development in the desert was Dekreped and Ming Bob. It was pretty cool.
Then, earlier this week, Dekreped contacts me again and gives me the heads up that their good friends, and fellow metal heads, Corrupt Defile is on tour and will be swinging by the valley for a couple shows. They asked if I could show them some love – and of course I was down. I was not only interested to see what another metal band was all about, but I was interested to see what their perspective on our scene out here was. An outsider’s opinion…
Turns out – they love the desert. I like that.
And I think you might like this interview and find it just as interesting as I did.
Also, make sure to make it out to their show at J Dee’s on the 22nd (tonight) and at the Red Barn on the 29th.
So, without further ado….

Band Name?
Corrupt Defile
What are the name of members in group & the instrument that they play?
Floyd – volcals, Angel – bass, Justen – drums, and Angelo – guitars.
Where is the band from and how did you guys form your group?
Corrupt Defile was born in the winter of ’06. In Oxnard, CA, formed by Floyed and Angelo with the intent of creating a dark agressive thrash metal band with no bullshit trandy chores’s, just mean ass thrash metal.
Who are some of your biggest musical influences?
Our main influences are mostly 80’s thrash like EXODUS, SLAYER, VENOM, and the 80’s Oxnard punk scene: DR.KNOW(kyle toucher days) R.K.L., AGRESSION. Our local punk scene in the 80’s was an amazeing time there were so many good bands playing in backyard an all the local spots, that whole scene influences us all as youg teenagers to become musicians.
What is your impression of the Desert’s metal music scene? What do you like about it? How is it different from other places?
The desert is cool we have playing out there for the last couple of years, on thing that stands out is the local bands are really cool and show alot of support for the bands that come from out of town we always have a real good time out there ULTRALORD AND DEKREPED are real good friends of ours so its always a pleasure to play out in the desert and hand with our friend. The music fans in the desert are real cool also they rock out pretty hard and that always makes for a killer show. We love the desert.
Tell me a little bit about your show that you just played at The Roxy. What was the night like? Any crazy shit happen?
The Roxy show was off the hook! It was put together by our good friend and co-manager Mikey Doling he booked an awsome line up of bands Instinct of Aggression head lined and our homies in Jameson kicked some metal ass that nite, there was a killer turn out and the beers were 3 dollers. It was the perfect nite.
How did you guys meet Mike Doling? He’s worked with Snot, Soulfly and Invitro, right? What does he do for you?
We met Mikey Doling in ’06 after hearing some demos he was producing from some bands in our area. Got his number on a whim for sure, called him up and booked some studio time and that was the beggining of an amazing friendship. Mikey has produced all of our music and really looked out for us. We work real well together, he is a big part of our band, his support had pushed our band to be its best and he has been working with us since the band was formed. Mikey even brought our guitar player Angelo out to play on tour with his band Invetro on the Devil Driver Napalm Death tour last year when there guitar player was having a kid and couldn’t make the tour. He’s been booking shows for us and he just had us do some dates with Snot which was an awsome time. Mikey Doling is gold man, we cant say enough good thins about the man.
Tell me a little bit about this tour you are on. Where are you going? How did you get it started?
This is hope we dont starve are run out of gas tour, were just booked a shit load of shows and want to reach as meany metal heads as we can. We know that hard work and commitment equal to progress so that why were on the road.
What’s it like knowing you have a fan base across the states?
The fans we have made are the most coolest, true metal heads you could ever want behind you. The word fan dosent even apply, they are just like us because we are metal fans first, then metal musicians second. So we feel just like they do we want somthing honest to be apart of and thats what we think metal is all about. The people who like and support what we do are honest true metal heads and what more could we ask for? This band means nothing without all of those who show up to the shows and listen to our music. We are thankful weather there is 2 or 200 people at our shows.
What do you like about traveling? What do you dislike?
We love being on the road we traval real well together and have alot of fun. We can get real silly alot of the time so theres not much stress, unless our guitar player is hungry. We look out for eachother and we like eachother so that is a real plus when you got to live in a van for days or weeks at a time, public bathrooms are the only thing that sucks about the road and a broken A.C. that sucks too.
When is your show(s) in the desert?
We will be playing J,D’s landing the 22nd and we will be playing THE RED BARN on the 29th.
What can the people of the 760 expect to see at your show on those days??
Expect a loud (LOUD) heavy ass show, lots of beer drinking and a real good time, we hope to see you all there. 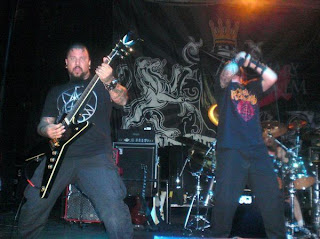 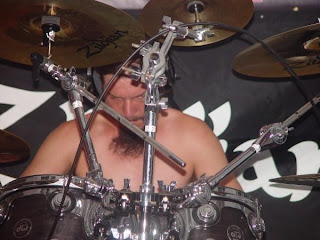 to check out their music and to find out when they play in the desert next: