Sarah ScheidemanJune 10, 2009
The CVAS Blog 0
I was bouncing around on the Internet… from blog to blog… looking for inspiration… when – BAM! – I found this needle in the haystack.
Turns out… the Arctic Monkeys recorded their most recent album in the desert with Josh Homme at his Mojave Desert studio.
As commented on by Tom Breihan, the man who wrote the Pitfork article, they seemed to have enjoyed their stay in the desert. So much, that in fact they started to infuse the desert’s beauty and vibe into their new press photos and album titles. They know what’s up.
I thought this article was pretty interesting and something for the Coachella Valley Art Scene readers to kinda think about for a minute.
So… feast your eyes on this one.. 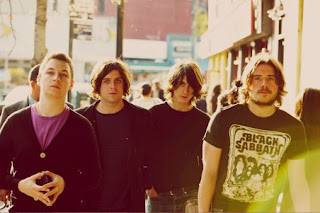 “They’ve already cranked out two albums’ worth of snarly, bratty, ridiculously fun post-Britpop, and now the Arctic Monkeys have their third album loaded up and ready to go. This time, though, things are looking a bit different.Domino will release the new Arctic Monkeys album on August 24 in the UK and August 25 in the U.S. The album doesn’t have a title yet, but the tracklist is below.
The Sheffield band recruited two producers for the new LP. One of those is a familiar face: Simian Mobile Disco‘s James Ford, who co-produced the band’s moderately rougher second album, Favourite Worst Nightmare. But the other producer screams “new direction”: Queens of the Stone Age frontman Josh Homme, who worked with the band in his Mojave Desert studio.
So yeah: They went out to the desert with Homme, and their new press photo prominently features long hair and a Sabbath shirt. Something tells me the Arctic Monkeys might indulge some stoner-rock ambitions on this new one. (And if “Fire and the Thud” isn’t a stoner-rock song title, I don’t know what is.) Given that the band’s first two albums gained much of their power from their punchy, straight-ahead energy, it’s anyone’s guess how things will turn out once prodigious fuzz finds its way into the mix. But we already know that Diddy is on board.In the meantime, the band will play practically every festival in Europe this summer.”

– written by Tom Breihan for www.pitchfork.com

Click here for the direct link to the article