How is everyone enjoying those meteor showers?
Could we ask for any bigger, clearer, darker skies? I think not. The Coachella Valley has to one of the best places in Southern California to to watch the meteor shower.
I don’t know about you, but each night I’ve been on my floating device, on my back, floating around, chilling out, and watching the meteors. Each meteor feels like a jolt of energy. It’s pretty magical.
Another thing that’s magical and in the desert’s skies is the excitement and anticipation for the amount of shows this weekend. It is an eclectic weekend, with a variety of shows. Each featuring shooting stars of their own genre.
See a shooting star, make a wish.
See a show, make a point to go and support.
This weekend, under the meteor showers…
THURSDAY NIGHT: 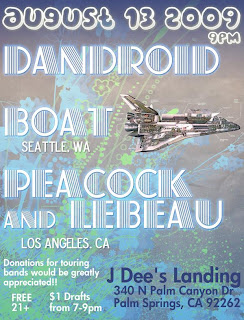 A Daily Dares event. Bands from out of town. An awesome flier. You don’t have to ask me twice. See you there.
FRIDAY NIGHT:
everyone is star gazing.
no organized parties.
🙁
SATURDAY NIGHT: 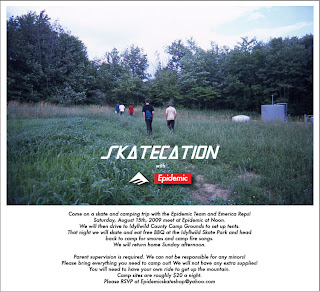 Californiacation. Vacation. Skatecation. You pick your party. Make sure to sign up ASAP! The guys are going to be in Idylwild! During the meteor show. Kewl dude. C ya l8r sk8r. 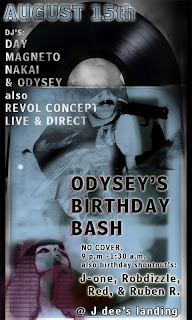 Warning: This is a LEO b-day party bash. All those not willing to get down – get out. Leos love to party. And this party is gonna be full of them. Some of the best DJs in the valley. Hip hop classics. Old school breakdancers. Oh yeah. I warned you. 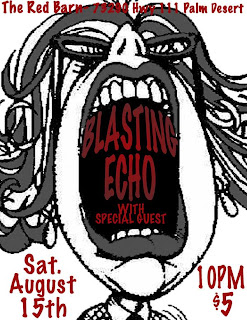 A Red Barn show. Guarenteed with a blasting echo. Jk. The band, Blasting Echo, will be there. You should too. Cheap drinks, thrills, and pool tables. 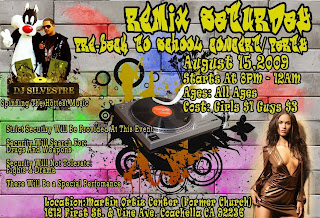 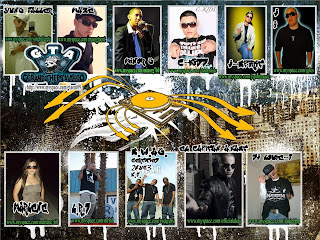 This is one of my favorite party fliers, ever. It’s pretty bad ass!. Everyone has their sunglasses on, looking cool, and repping the desert. And hey, is Silvester the mascot gonna really make an appearance? That would seal the deal. 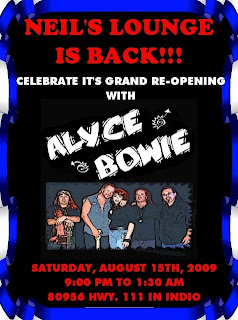 Just when you thought Neil’s Lounge disappeared, it returns the night of the 15th! Alcye and Bowie rock the party. 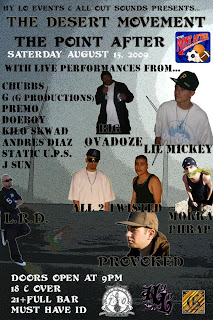 Must say… I love this green friendly flyer. Not only is it on the internet, and not a paper product, it also features our energy efficient windmills that the Coachella Valley is so famous for. Go green. Go to the show. 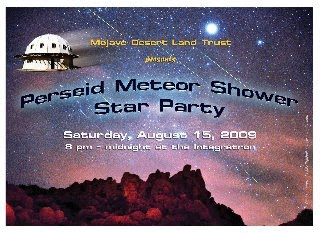 This is the party to go to!!!! A meteor party in Joshua Tree? Are you kidding? Of ccoouurrrsseee we’re there. Bring all the goodies. 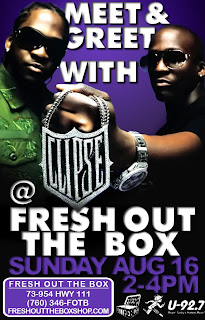 Yo. The Clipse are gonna be at Fresh Out the Box. Need I say more? Those who know these hip hop legends need no more explanation. 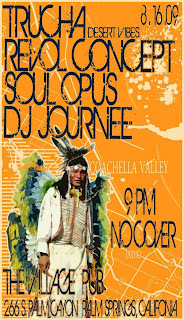 Thank you for spending another wee with the Coachella Valley Art Scene!
We appreciate all the support.
If you have any suggestions, questions, comments… just email me.
thecoachellavalleyartscene@gmail.com