Sarah ScheidemanSeptember 17, 2009
Artist SpotlightEvents 0
“Growing up outside Los Angeles, we would find ourselves, once every couple years or so, visiting historic downtown. Whether checking out the Bradbury building, Union Station or Chinatown, we always made sure to take a stroll down the birthplace of the City of Angels, Olvera Street. Centered around a traditional Mexican style plaza, Olvera Street is a historic hub and insight to Mexicano culture. Featuring colorful dresses, bollero musicians, Oaxacan altars, churro carts, Sacred Hearts and bootleg Mickey Mouse shirts, the energy and spirit of Olvera Street is one that we’ll never forget, and one that resounds in the memory especially upon entering the Date Farmers’ latest show, “Strange Fruit.”
For Strange Fruit, Carlos and Armando have pulled no punches. Driving up from Southern California the day before the opening, the Date Farmers have transformed FIFTY24SF into a proverbial swap-meet, a place where the Olvera Street visits of our childhood has met the peyote trips of our adult life. Discarded signs, handcrafted sculpture, vintage typography and an arcade machine playing the Date Famers x N.A.S.A. “A Volta” video make for a creative and well rounded show. As an added bonus, the ever lovely Marsea Goldberg from New Image Art and Modern Multiples’ master printers Richard Duardo and Sarah Melendez made appearances as well.” – nicely put by Ken Harman of ArrestedMotion.com 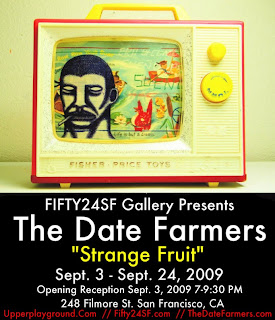 I met up with the Date Farmers and Alf Alpha the morning of the big show.
First thing we did was venture out to get some early morning Kombucha. If you aren’t already drinking Kombucha, then get on it. Breakfast for champions.

Once we got our all-natural energy boost, it was time to head to the gallery and get to work…

Check the beanie on this guy. That’s my favorite feature to the show. A tuff second would be the paper mache sculpture dude to the left, the white socks with thong sandals cracks me up. All too real to deal.
Anyways, once the guys finished up we all headed back to the apartment that Upper Playground had set up for them. It was a place around the corner where all U.P.’s featured artists stay while in town.

Next thing you know, someone rings the doorbell…

It was Richard Duardo. Richard is bad ass. He has stories for days, and they are all super interesting.

Party was poppin’ all night.
San Francisco is really down. They have a lot of love and really support the arts. It was cool to see that many people come out. We met a lot of really cool people that nigh that we later hung out with the rest of the weekend. Everyone was so accommodatible and awesome. Thank you!

Hey… what do you know? It’s Albert Reyes! Repping LA with his King Taco jacket.

The guys brought up an old arcade game from back home. Playing inside the arcade game was the Date Farmers X NASA X Logan – “A Volta” music video on loop.

Met a lot of cool kids. Some beat boxed, some were kind enough to share some of their goods, and some knew about after parties. Word. We took everyone up on their offer to go to the after party at the MINA Art Gallery in the Finacial District of SF. Turns out MINA was some sort of art – super – club. Music was thumpin, people were dancing, drinks were flowing, it was rad. We had a good time. Around 3am we called it a night.
Around 11am the next morning we were up and ready to go. Carlos had been wanting to walk across the Golden Gate Bridge for days. This is probably due to him watching all those documentaries on people who have commited suicide from it days before embarcing on his trip up to SF. Kinda creepy, but nonetheless it had us all intrigued…

It was a beautiful day to walk across the bridge. It was as if it knew we were coming.
There is something really beautiful about leaving 100 degree weather back home to be greeted by the nicest weather and community in a city up north. It was an amazing weekend, and amazing show, and amazingly enough… although we had a great time, we were all ready to head back to the desert as soon as the next flight came in.
Some other great recaps of the Date Farmers X Fifty24SF gallery opening can be found on the following blogs:
Upper Playground’s Blog
The Artchival
ArrestedMotion.com
Juxtapoz Magazine
FecalFace.com
to check out more photos that I took of the event & weekend with the Date Farmers, please visit:
www.myspace.com/thecvartscene
or here is the direct link to the Album
Thanks again to the Date Farmers and Alf Alpha for inviting me and to everyone who came out and supported.
For any questions or comments, I’m just an email away… thecoachellavalleyartscene@gmail.com