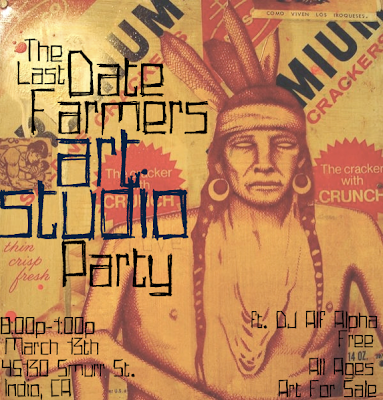 Armando Lerma and Carlos Ramirez joined artistic forces after meeting at a Coachella Valley art gallery in 1998. In 2001 they entered the Los Angeles gallery scene as the Date Farmers with a show at New Image Art Gallery. Using found materials such as discarded signs, wood and corrugated metal, their work echoes Mexican-American heritage rooted in California pop culture. Their paintings, collages and three dimensional sculptures contain elements influenced by graffiti, Mexican street murals, Revolutionary posters, and traditional Oaxacan sign painting (which they were exposed to on a trip to Oaxaca, courtesy of Upper Playground).

Lerma explains, “Using stuff that was thrown away is Mexican ingenuity. People’s idea of art is that it’s really expensive and [made of] nice materials, but found objects are so abundant, they’re much easier and freeing for us.”

Works by the Date Farmers have been included in prestigious private collections such as those of: Arnold Lehman, Director of the Brooklyn Museum of Art, and Norman Rosenthal, Exhibitions Secratary of the Royal Academy of Arts in London. The pair has participated in numerous art fairs, in New York, Miami, LA, Chicago, and Stockholm, with International gallery exhibitions in Tokyo and London. They are currently showing at the Oakland Museum of Art. They were featured on Current TV.

… as many of you probably know (aka got the Facebook/Myspace invite), the Date farmers will be having their last show in their art studio out in Indio. The guys will be moving shop to Los Angeles to take their art game to new levels. We are very, very excited for them and to celebrate the move up, we move in for a night and get our party on. The Date Farmers will be exhibiting their latest works. Some art will be for sale. Please come ready to have a good time, check out some new art, and wish the guys well on their way.

Not to worry, their next Date Farmer Art Studio will be coming soon… but, of course, in Los Angeles! So, let’s cross our fingers that the Amtrak/train stops in our favor.

Adios, Date Farmers! You were the Coachella Valley Art Scene’s inspiration to start the blog!!! And you will continue to inspire….

Here is a sneak piece of some of the work they had lying around their studio the last time I was in there (maybe a week or two ago):

some of the peeps who came through last time…

some of the music from the last show…
This time around, we will most likely only be having DJ Alf Alpha spinning records. He is an expert when it comes to rocking art shows. Here is a video I took from my favorite art show DJ Alf Alpha spun at while ago. Alf Alpha and the band, No Age, rocked this spot.
Keep an ear open for any word of a special guest set from some local bands around town…
HOPE TO SEE YOU THERE!!!