Spenindg Spring Equinox in the Desert

What does this whole …. “Spring Equinox” mean anyway?
The March equinox will occur on March 20 in 2010, marking the beginning of spring in the northern hemisphere and fall (autumn) in the southern hemisphere from an astronomical viewpoint. The March equinox will occur at 17:32 (or 5:32pm) at Coordinated Universal Time (UTC) on this date.
Twice a year, around March 20 or 21 and September 22 or 23, the sun shines directly on the equator and the length of day and night are nearly equal in all parts of the world. These two days are known as the March(vernal or spring in the northern hemisphere) equinox and the September equinox.

The March equinox is the movement when the sun crosses the true celestial equator – or the line in the sky above the earth’s equator – from south to north, around March 20 (or March 21) of each year. At that time, day and night are balanced to nearly 12 hours each all over the world and the earth’s axis of rotation is perpendicular to the line connecting the centers of the earth and the sun. In gyroscopic motion, the earth’s rotational axis migrates in a slow circle based as a consequence of the moon’s pull on a nonspherical earth. This nearly uniform motion causes the position of the equinoxes to move backwards along the ecliptic in a period of about 25,725 years.

In the northern hemisphere the March equinox marks the start of spring and has long been celebrated as a time of rebirth. Many cultures and religions celebrate or observe holidays and festivals around the time of the March equinox, such as the Easter holiday period. – all info from: www.timeanddate.com

The word “equinox” derives from the Latin words meaning “equal night” and refers to the time when the sun crosses the equator. At such times, day and night are everywhere of nearly equal length everywhere in the world.

It is important to note that while the March equinox marks the beginning of spring in the northern hemisphere, it is the start of autumn in many parts of the southern hemisphere. – all info from: www.timeanddate.com

So, how does one celebrate the Spring Equinox properly?

There is no greater place then to be in the desert for the Spring Equinox. That’s for sure. And one of the best, most interesting places to check out while you are out here, is the High Desert (Landers and Joshua Tree to be exact). Which, includes a nice/mystical tour of Integrattron, a Sound Bath, visit Giant Rock, and peek of the Noah Purifoy Outdoor Desert Art Museum.

Here’s a little bit of info on my recommendation…

The historical and world-famous

Integratron, a domed structure 38 ft high and 55 ft in diameter, is located at the intersection of geomagnetic forces in the Mojave Desert north of Palm Springs, California. Conceived and built between 1965 and 1978 by George Van Tassel, one of the earliest pioneers in the UFO contactee movement, the Integratron’s one-of-a-kind design is based on descriptions of Moses’ Tabernacle, the writings of Nikola Tesla, and, according to Mr. Van Tassel, directions received telepathically from extraterrestrials. Though originally designed by Van Tassel as a rejuvenation and time machine, today it is the only all-wood, acoustically perfect sound chamber in the U.S.

The Sound Bath is the Integratron’s signature experience for visitors. According to the current operators “Using the deep resonance of the upper sound chamber, energy and the sound are focused and amplified by the building’s unique geometry. Using pure Quartz Crystal Singing Bowls keyed harmonically to the human body, the 30-minute Sound Bath bathes the body in waves of peace, balance, and deep relaxation. It is the antidote to everyday life.“

A Guided Tour of Giant Rock

Weighing approximately 25,000 tons, approximately 7 stories tall, and covering 5,800 sq. ft, the million-year-old. Giant Rock is considered the largest freestanding boulder in the world. It was first revered by Native American tribes from the Morongo Basin and beyond, who held annual ceremonies nearby and considered it sacred grounds.After discovery by white men in the 1800’s, in the mid-1900’s a German-American prospecter named Frank Critzer became associated with Giant Rock after digging out living quarters under the massive boulder and grading the remote Giant Rock airstrip. Befriended by the young George Van Tassel, Frank’s life ended dramatically in a dynamite explosion, after which Van Tassel moved his wife and three daughters from Long Beach, California, into Critzer’s underground quarters. Van Tassel claimed that at Giant Rock he was visited by beings from Venus who shared information he used in constructing the Integratron.

From 1954 to 1977 Van Tassel hosted annual Giant Rock Spacecraft Conventions, attended by thousands, some of whom flew in just to eat at Eva Van Tassel’s Come On Inn restaurant at the site. In February 2000 the Rock split with an auspicious message from a Hopi prophecy made centuries prior. Giant Rock has also been painted pink by a Los Angeles artist. Yet after all these adventures, Giant Rock continues to produce mysteries and capture the region’s folklore.

When gathered under the white staging tent in the Integratron parking lot, attendees are offered a 20-minute introduction to Giant Rock’s history followed by handing out of maps for an optional trip to Giant Rock (3.5 miles away by car) and further discussion at the site. Attendees return to the Integratron’s parking lot.

The mission of the Noah Purifoy Foundation is to preserve and maintain this art site, developed for 20 years by artist Noah Purifoy in Joshua Tree, California, to be an Outdoor Desert Art Museum of Assemblage Sculpture open to the public. Please be aware that the grounds are a museum. The artwork should be treated as you would an indoor museum–that is, no handling, moving, or removing of any objects, or defacing anything. There are no fences, and we ask you to park in front of the site off Blair Lane, not across from it, in deference to our neighbors.

As an organization we are in the early stages of developing the site for formal touring.We appreciate your interest and welcome your involvement in the work of the foundation to preserve Noah Purifoy’s work and legacy as artist, sculptor, philosopher, and mentor for public participation and enjoyment.

Note: There are no restroom facilities at the site.

To find out where to sign up, what to bring and how much it will cost:

Other events going on in the High Desert celebrating the Equinox…

Even the Low Desert is having it’s fair share of celebration.
Stop by Palm Springs’s Urban Yoga for a very special potluck. This is for all the foodies out there... 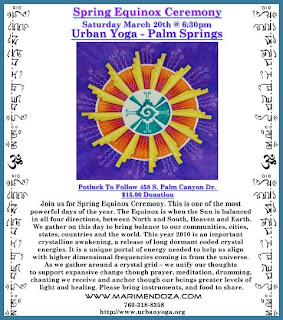