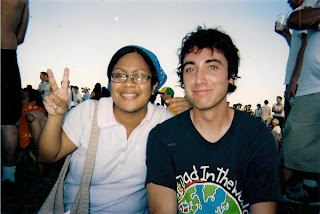 A Coachella Testimonial
from Michelle Castillo
This year we decided to reach out to some of our Coachella Valley Art Scene readers and ask them to share their favorite Coachella memories with us. In this post we feature Michelle Castillo, a teacher, born, raised, and currently living in Palm Springs.
Michelle Castillo has attended Coachella Fest since age 16, and loves art, music, and culture. She feels that Coachella is a way for people to interact with each other face to face, be out and nature, and share our common love of music and art. In our busy, computerized, fast paced lives, Coachella (to Michelle) is time to just slow down and take the wonderful desert atmosphere mixed in with good tunes, good friends, and 80,000 of your closest friends.
Each photo has a description that Michelle has submitted. They give a little back story to each photo. Enjoy.
*story on Michelle’s main photo… “Coachella 2004: I was sitting by this guy, with the most amazing blue eyes : ) and we started to talk about music, I asked if I could take picture with him, not realizing that his wife took the picture and his shirt says, “World’s best Dad” my friends and I still laugh about that each year.” 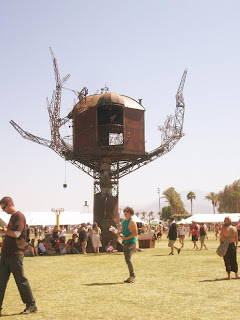 Coachella 2008 Art Installation: Super cool tree house made out of recycled wood and metal!That you could totally climb and go into, if you wanted! 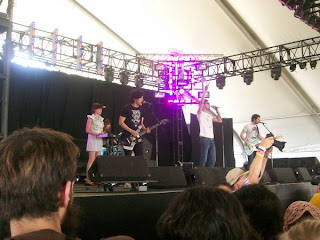 The Teenagers Coachella 2008: “I loved my English Romance” 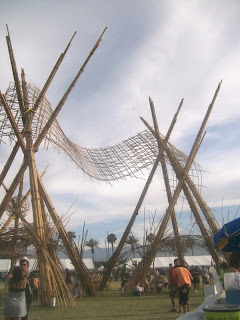 Coachella 2008: Tepee Art, groovy teepee that lit up at night with pretty colors : )

Art Installation Coachella Nature Dome: I believe it is 2004 or 2005 (not sure. lol) Awesome dome art that depicted somewhat of the fall season. It had a tree, wind chimes, rakes, and people just relaxing from the hot Coachella desert sun. 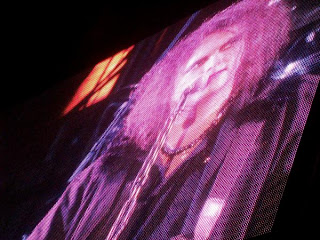 The Cure playing at Coachella 2009: and Robert Smith’s face up close and personal!

Coachella 2008 Prince Painting was the closest we got to him: Seeing Prince that year was Auh-Mazing! My friends and I were in the middle to the back area, and it definitely felt like we were partying like it was 1999! 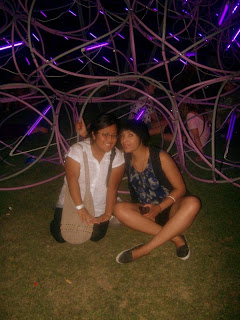 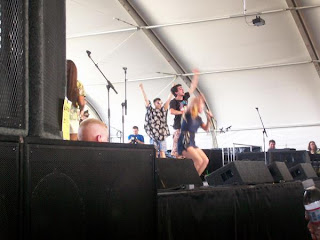 Coachella 2008: Instead of watching this other band(totally forgot the band’s name) with my friend I wandered into the Gobi tent and stumbled across this band Bonde Do Role. The band’s raw energy and crazy dancing crowd, totally made this set feel like a party! Top 5 bands for me that year. 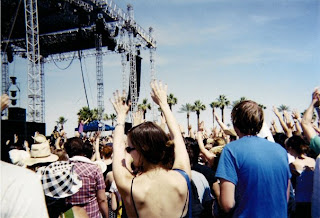 Coachella 2004: The crowd grooving to the tunes of the band !!! (Chk Chk Chk). The energy of the crowd during this set was amazing. 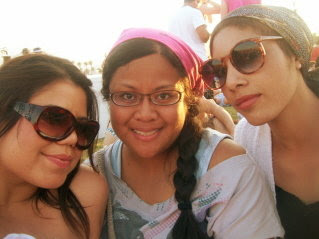 Picture of my friends and I Coachella 2008:

Three friends in the midst of the big Coachella crowd enjoying fun, sun, and music. This is the picture I will show my grand children and say to them ,” Yeah, that is right grandma is cool and we lived.” : )

Thank you Michelle for sharing your story! We love it!

If you would like to submit your Coachella Testimonial, please send us some photos and/or videos to thecoachellavalleyartscene@gmail.com or just facebook us!