Sarah ScheidemanMay 14, 2010
The CVAS Blog 0
I met Jens and Tim at friend/film maker, Steven Preston’s, house a couple days ago. They are two young, tall, handsome young men who have traveled all the way from Holland to the Coachella Valley to write a book on the desert’s generator-powered music culture. Having never been to California before, I was quite intrigued on what their opinion of the Coachella Valley might be. An outsider’s perspective. Are we cool? Are we lame? Only Jens and Tim would truly be able to tell us.
I slept on the idea and within a couple days I tracked down Jens’s phone number and ask him if they would like to be guest writers to the Coachella Valley Art Scene for the time that they are out here. I thought it would be
really cool to hear all about their travels and their experiences. They are from the same generation, yet, from an entirely different culture, making it that much more intriguing in what they have to say. I told them they could have complete creative freedom with this feature and put the ball in their court.
Turns out, Jens and Tim were game, and the rest is history.
So, without further ado… I present to you… two desert nomads Jens + Tim… 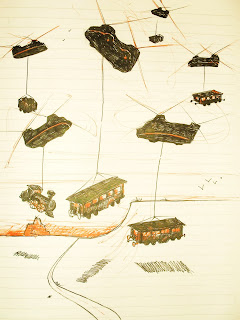 In our trip, moments of ripping around pit-bull-jawed are alternated with those of pristine silence. Absence of the screams and whispers is the desert’s one true gift. A sign demarcates this dirt road is not maintained by the county; bumpily we glide into the infertile womb of California. In this echo-chamber of thoughts, the smallest action is noted. As I light my cigarette the crackling tobacco explodes, incinerates, it’s expanding gases leave sonic marks in the boiling air. Band-rehearsals resound, a hissing in my skull. My skin overheats – power no para in that sun – and slowly the little mouths start to drip sweat. Gasping for air they suck in the thoughts that surround me. They gush in, raving around within me, destroying, liberating. Even the hot air between my fingers and all the little noises it makes won’t set me free. By the time my surface temperature has passed that of my internal organs, finally; distraction. A pair of fish-tail exhausts offer me a chance to drag myself free from the shackles of unspoiled thought. I wait for Doppler’s clue, turn my head quickly at the fall of frequency and I escape.

The eternal sequel: chaos. We are back on highway 247 and are passing by bleached, devaporized artifacts. Tires. Tires. Railway carriage, 100 years old. Fence. Shotgun-shells. Spray-paint, messages. Spray-paint. This is the right spot to find free cokes for man’s fiery furnace, a night-school playground in the afterhours. Jaws snap, fists clench, hormone squirts in these snaky spaces between boulders. The desert reveals itself, drops it’s gown, opens the border of madness and bliss.

All shook up, we descend back into the valley of veils. Two blocks equal one widescreen. One man-planted palm tree equals one man-soothing burger, plus refill on the fries. Wide-eyed we take a bath in the red noise of flesh at 98,6° Fahrenheit. In deafening clamour, we cover our ears. In crushing silence we bash our face on the wheel and sound the horn until the battery dies.