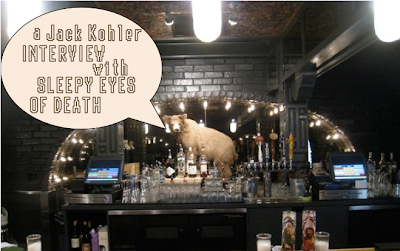 Jack Kohler: I’m sitting here with Sleepy Eyes of Death, of Seattle, Washington poolside at the Ace Hotel, how’re you guys doing?
Sleepy Eyes of Death: Doing great, Palm Springs!
Jack : Well first off, how did you come up with the name, and how’d you all meet?
SEOD/ Keith: The name came from the guy who isn’t here, it’s based off an old Japanese television series from the 70s, and Andrew and Joel were doing it, just the two of them, a few keyboards and a drum machine and then Cassidy came on board a little after with the guitar, and then I got them a show, wanted to get involved, and then I hooked up with them 5 or 6 years ago.
JK :What style of music would you call what you do?
SEOD : Emo-tronic…(laughs), post rock, shoegaze has also been used, there’s elements of it, electrogaze, pick one of them.
JK: How is what you do received back home comparatively to California?
SEOD :You know at first, people were pretty confused about what we were trying to do, but once KEXP, the station up there ,started to champion some of our songs and played it more often, and The Stranger, which is this amazing newspaper up there, a couple of the writers really understood what we were trying to do and started to do some writing about us, people started coming out, so now we get an incredible response there, the stations are all really good about supporting us, the newspapers are always happy to help us out with promoting, we try not saturate too much, we don’t play out too often, but every couple of months we’ll play a show and we always fill the place up.
JK : Have you ever gotten an odd piece of equipment from a thrift store that you’ve used or put together to play in a set?

SEOD : We had a Theremin for a while, I get all my stuff on Craigslist mostly, not very interesting, most of it are internet purchases, it’s so hard to find the gear we use, we search for it, you can’t just find it at Guitar center.
JK: Keith was showing me a little bit of your gear last night, I saw you had two Moog Opus‘s, a Roland Juno, an MPC, must’ve taken a while to get a hold of it all.
SEOD: I picked one of them up at a music shop down the street at this store, American music, and I got the Juno at Trading Musician, and I started playing with them, and liked the way they sounded, liked the controls, and thought it’d be fun to jam on those with a drum machine and it turned out to be that they were capable of doing a lot more of what I had in mind, we program our own patches and we create our own sounds and use those in these songs that didn’t exist before or whatever.

JK: And you use the MPC to loop it all together?
SEOD/Keith: Yeah the MPC is sort of the brain of the operation, it triggers and sequences everything and we use it for some sampling, and then we send the click out, I mean I’m getting nerdy now..
JK: No tell it all, we want to hear.
SEOD: (laughs) We send the click out from the MPC, so the drummer can keep up with the sequences and that kind of thing.
JK: What were you influences when you started, or are you all free form?
SEOD: We each bring a little bit of our own to the table although we definitely have some similar, common tastes I’d say, theres a lot of 80s science fiction, film score, horror film score stuff that we’re into, like John Carpenter, and Vangelis, and Tangerine Dream, and then there’s just a ton of great music coming out right now, that’s using a lot of the same electronic elements, like Zombie, M83 of course, we get compared to them a lot, so its hard not to mention them. We also draw from the Mogwai and Mono, bands that use a lot of dynamics, swell up, fall down, break it down.
JK: I saw that you guys are playing your last tour date with Sleepy Sun, and they’ve also passed through here recently, is there a coincidence there, have you played with them before?
SEOD: I think it just worked out that way although I know the booker at the venue got a chuckle out of it, and thought it would make for a great show, but it’s mostly coincidence.
JK: They’re really geared towards psychedelia, would you say that psychedelic art, both visual and musical, blends well or complicates electronic music?
SEOD: Yeah, we know as being an instrumental band it’s kind of harder to get people to accept what we’re doing, without this front and center singer, it’s hard for people to digest what we’re doing, so we do everything we can to help them in the process and so just putting in visuals and lights, and fog and strobe, and projectors, it kind of helps smooth out the music, it makes for a great show. I feel that there’s a lot of other bands that do things more psychedelic than we would, I mean we’re not really in that, both in aspects of the music and a light show, we started off that way moreso.
JK: With this 70’s 80’s revival of dance music emerging, especially in music festivals, would you say that progressive electronic live music is being integrated well, or overproduced?
SEOD: Definitely not overproduced, I mean there’s such a wide range of all of it, especially now there’s a lot of lo-fi stuff, there’s this whole lo-fi scene, aesthetic, that’s bubbling up, I mean we’ll see how far that goes but overproduced, absolutely not, I think there’s aesthetics, and some bands will latch on to whatever’s hot at the time and some bands don’t, but I think it’s definitely being integrated well.
JK: Did you feel good about your performance last night?

SEOD: Yeah, it was weird, we were expecting everyone to run away as soon as we started playing, people were eating and everything (laughs) that’s about a fifth of the volume that we play so it was really hard to pull back on the drums and keep it quiet, but we’re definitely more of an intense band, to play a place where I’m conscious of not hitting a server with a guitar as they’re walking by, is kind of a weird thing, but it was fun. But everyone was into it, it was cool.

JK: How has this California tour been, tell me something that’s happened, good or bad.
SEOD: Sacramento, we’d just played there last night, we were kind of coming down on this bad time, it was one of those shows that forced you to question what you were doing with your life (laughs) We got there and there was nobody there, we set up,
nobody was there, we played the entire set for the sound guy, the other bands playing that night, we didn’t even stay in the room, they kind of left, and for whatever reason, who knows, maybe they had to go eat something, but it felt pretty lonely, and it just didn’t sound that great, and the sound guy was such a character that it just made it really surreal. We were laughing about it as we drove away. And then coming from our release show we had in Seattle, just a few weeks back, we packed a good size venue, about 450, it was pretty surreal I guess. We played San Francisco the night before and it was a good crowd, relatively small but the show was fun, and Portland was rad.
JK: So you felt good about playing here, what about any of the other Ace spots?

SEOD: If they’re like this, I’ll play any Ace, it’s been great, we could do an Ace Hotel tour (laughs), if you want to do it, we’ll let you guys know when that is.
JK: Well thanks guys, glad to talk to you, hope the tour goes well.
SEOD: Good questions, thanks.
* interview, taking the initiative, and all words by Jack Kohler