Recently, and ironically, I have been reading a lot of articles that have been interviewing the top concert organizers/promoters in our country. These men are brains and bronze behind the Coachella Music and Arts Festival and the Electric Daisy Carnival. They are responsible for being the taste makers to our generation’s musical influences, culture crafters, and showing us the future of art, by ways of large scale art installations and light shows. In the two separate interviews, both of the concert organizers had a similar recipes to the way they’ve gave into the forever evolving nature of our generation’s taste buds.

In the first article I read, the journalist was interviewing the organizer behind the Coachella Valley Music and Art Festival. They were reminiscing back when the festival first started, when it was typical to watch everyone stay true to their own music genre themed tents. For example, if you were an electro head, you stayed around the Sahara tent all day. If you were a hip hop head, you just watched hip hop acts all night. Today, however, the concert organizers have seen the masses change. Now, everyone likes every other genre of music. It’s no secret anymore; we like it all, we like it mashed up, and we like it even better when you can’t define it.
The Electric Daisy Carnival organizer told his story how the rave scene used to be very small, experimental, somewhat illegal, and now they are very proud to say that they expect over 100,000 people to attend their concert each day this weekend. He also went on to talk about the wide variety of people who now come to enjoy the festival experience, and how interesting it is to watch the explosion and popularity of the DJ culture, DJs are now the big time super stars to the show.
After reading both articles I got a sense that we as music and entertainment consumers are sharp, smart, have done our research and are anticipating the next big thing. Bigger than a song mash-up, bigger than flashing lights. Logically, the next step could only be… put all of our interests in a blender and see if anything good comes out of it. Experiment a little…
Right?… Hmm…
So, I let that on that concept marinate in my head for a couple weeks. Then next thing you know, a week ago, Perry Scanlon emails me his flyer to his upcoming “Free Light Show” show. On the flyer it reads; “sound-responsive lights & lasers, mash-ups, experimental sounds, original songs, & borrowed music”.
Aaahhh hhhaaa!!! Guess I’m not so crazy after all.
Typically, when I receive event flyers, it is pretty straight forward as to what to expect. But, as for Perry’s “Free Light Show” event, I had a feeling I was only reading half the story. Is this a light show? A music show? Both? Wait – could this possibly the answer to my future of music conspiracy?!? A mash-up of both art forms, chopped up and thrown in the blender together to create some delicious food for thought?
After I asked Perry a few necessary questions about his show, I realized that the man is on to something. Something that is different, experimental, unique. Something that can’t even really be defined just yet… something before it’s time, in it’s prime.
INTERVIEW: PERRY SCANLON 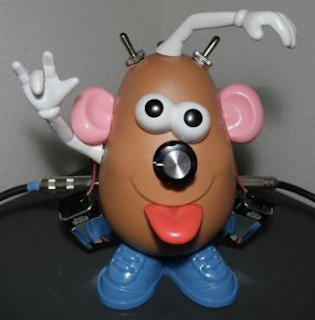 What makes a Light Show different from a regular show or a music show or an art show?
The lights are a big part of the music experience. These are sound-responsive, not just random like most stage lighting for music shows. It is an art form, but much different than light sculptures which are usually not combined with music.
What kind of materials do you use to make your sound-responsive lights and lazers?
For the light controllers, I order kits off the Internet, assemble and usually modify them, and mount them inside household objects or homemade cases. I have started designing my own circuit from scratch but not built it yet. The laser shows are constructed with craft mirrors (from Michael’s), speakers, motors, and laser pointers (5mW) that I get off the Internet. To get many different colors, I use a violet laser and fluorescent tagboard. It’s like a black light. The green lasers can also flouresce orange.

How did you get into this kinda stuff??
Last year my dad gave me a gift certificate and I got a t-shirt with a graphic equalizer. It was fun, but I wanted to do something better with lights and built my first color organin August. Unsatisfied with that, I modified it and started trying other kits. A friend suggested I get into lasers, so I built my first laser show in January of this year. YouTube has been a source of inspiration and education, plus I add my own ideas into the mix.

So, from what I understand, you will be performing under the name, Electro Ghost. And correct me if I’m wrong but Electro Ghost is a two member group… a DJ and you, the lights guy, is this right? If so, can you give me your DJ’s name and both of your backgrounds?
That’s a good summary, but we both do a lot more. Darius (the DJ) writes music on the computer, makes mash-ups, plays guitar, piano, synthesizer, bass, and occasionally experiments with circuits like me. I (Perry) do a little music such as keyboard, vocals, bass guitar, and experimental guitar/bass sound processing. I also do a little song-writing but very simple in comparison to some of Darius’s songs. Most of what I’ve learned about music has been in the last 2 years.

Who makes the music that you will be playing? And what could you compare the sound to?
I haven’t been practicing much lately, so most of Saturday’s music will be from Darius. His original songs are usually influenced by Aphex Twin and Boards of Canada. His “borrowed” music samples are all over the place really. We both think it’s funny to combine different styles that are not normally heard together: children’s music + profanity, classical music with metal, etc. I think Darius will do some keypad sampling and maybe play guitar or synth. His little brother Taj may play guitar and sing whenever we change our equipment setup.
*photo of a Perry Scanlon invention, a Mr. Potato Head Guitar Fuzz Box and Bass Synthesizer 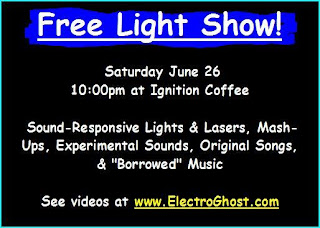 Is all this electronic talk sounding like morse code to you? Well, here is a visual representation of what Electro Ghost does. To see more, make sure to go to their show Saturday night at Ignition.