Being that members from the world famous rock bands; Queens of the Stone Age, Eagles of Death Metals and Them Crooked Vultures are from the Coachella Valley, this benefit show my hit a few of us in the heart. Make sure to read the information provided below and make plans to go out to LA on August 12th to support your old school friend, or source of inspiration, Brian O’Conner for his Benefit Show at the Club Nokia.

Queens of the Stone Age and Eagles of Death Metal have confirmed a benefit appearance at Los Angeles’s Club Nokia for Thursday, August 12th. The show is being held to raise funds for Eagles of Death Metal bassist Brian O’Connor who was recently diagnosed with cancer and is currently undergoing treatment in Los Angeles. Net proceeds from the show will be contributed to a fund which has been established in conjunction with Sweet Relief Musicians Fund, to assist with Brian’s medical aid and vital living expenses.
Tickets for the August 12th performance will be available beginning on Friday, July 16th at 10:00 am PST at Ticketmaster. 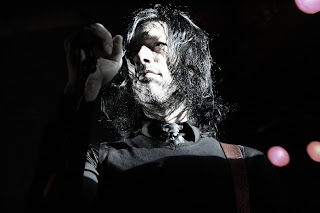 The Los Angeles gig will be the second Josh Homme-organized benefits for O’Connor, the first being a show by Them Crooked Vultures which was held Monday, July 5th @ London’s O2 Academy.
To make a donation to the Brian O’Connor fund, please visithttp://www.brianeodm.org.
For More information on Sweet Relief Musicians fund, please visitwww.sweetrelief.org.

“the best, most important rock album for years…No gimmicks, no postmodern guilt-trip bullshit, just punk rock space-cadet genius, Queens Of The Stone Age’s major label debut compromises nothing but still has mass appeal. The new rock royalty have come to claim their throne. Do not miss out on this.” — NME, September 2000

One of Rolling Stone’s top 100 albums of the decade, Rated Rfrom Queens Of The Stone Age marks its 10th anniversary with the expanded, two-CD Rated R – Deluxe Edition(Interscope/UMe), released August 3, 2010. Added to the original album is a second disc with six B-sides and the band’s memorable summer 2000 Reading Festival concert–featuring nine previously unreleased songs, including live versions ofRated R‘s “Feel Good Hit Of The Summer,” “The Lost Art Of Keeping A Secret,” “Better Living Through Chemistry” and “Quick And To The Pointless.”

The B-sides are “Ode To Clarissa”; “You’re So Vague,” a spoof of Carly Simon’s “You’re So Vain”; covers of Romeo Void’s “Never Say Never” and the Kinks’ “Who’ll Be The Next In Line”; a live version of the album’s “Monsters In The Parasol”; and a re-recording of “Born To Hula,” an early QOTSA song. The other Reading Festival tracks are concert takes on “Ode To Clarissa,” three songs from the band’s debut album (“Regular John,” “Avon” and “You Can’t Quit Me, Baby”), and “Millionaire,” a song originally from Josh Homme side project Desert Sessions.
Issued in June 2000, Rated R was QOTSA’s breakthrough, the band’s second album but first on a major label. Led by singer-songwriter Homme and emerging from influential California desert rockers Kyuss, QOTSA debuted with a self-titled album in 1998 that instantly earned the group accolades. After a tour, QOTSA returned to the studio with Homme’s long-time collaborator and co-producer Chris Goss (of Masters of Reality) as well as former Kyuss bassist-singer-songwriter Nick Oliveri. The result was Rated R , which guested Screaming Trees’ Mark Lanegan (lead vocals on “In The Fade”) and Judas Priest’s Rob Halford (backing on “Feel Good Hit Of The Summer”). But it was the anthemic “The Lost Art Of Keeping A Secret” which became the band’s most popular song. Rated R was, as its NME reviewer wrote, “the best, most important rock album for years.” A gold album, four Grammy nominations, seven more Modern Rock Top 40s and 10 years later, Queens Of The Stone Age return this summer to the Reading Festival and revisit a landmark album with Rated R – Deluxe Edition.