I am ringing the Amber Albert on the 8 Bit Bandit, one of the first electronic music producers from the Coachella Valley who specializes in robbing sounds from soundtracks closely connected to our childhood memories. He’s been kidnapping our old Nintendo games, chopping them up, sampling the sounds, and making the illest beats out of them. From creating the dopest Biggie Smalls remixes, to DJing with bandannas tied around his face, to working on his most recent projects with the hip hops collective Project Blowed from the LA’s finest underground hip hop scene, the 8 Bit Bandit is definitely a man to give props to. The 8 Bit Bandit started making his cutting edge music back in the late 1990’s, which is still relevant and all the way live today, and will be for years to follow. Without further ado, I introduce you to the official 8 Bit Bandit… 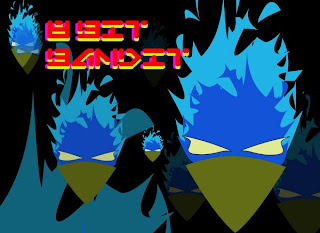 Name: 8 bit bandit
Astrological Sign: Cancer
Where were you born? Raised? Redlands/Palm Desert
How do you think where you were born/raised effected/influenced you as an artist? I think growing up I had the typical 80’s/90’s household, mom and pop both working to make ends meet so a lot of my childhood memories are pizza and video games you know. I think it had to do with the area where three months out of the year its too hot to get back on your skateboard and go right!? But yeah i think the area has inspired me to develop that down time into something positive and creative like music.
Who are your biggest influences? I think my biggest influence was one of my brothers friends as a kid, man he could whale on the guitar and it really inspired me to learn all the instruments which eventually led me to beat production and what i put out today. He got me way into music
How would you describe your sound? Dirty, trashy, nasty, 8 bit electro house, hip-hop sweety pop songs with a dash of techno
When did you start making 8 bit music? And what was your inspiration to do it/use that type of machinery? I started creating Asterisk the first 8 bit bandit CD in 2003, it was complete by 2004 and put out for download. At first i used a Midi NES system where you get a Nintendo and put a special cartridge in it with a midi cable coming out of it to control the sounds of the Nintendo from Pro Tools with midi keys hooked in. Later i scraped all of it for some killer plug ins on the computer which i still used today, their more reliable for composing. Lets just say after breaking 3 Nintendo’s i called it quits on Midi NES.
You have performed at numerous venues and shows around the Coachella Valley, what is your perspective on the Coachella Valley music scene? How have you seen it change over the years? Lets see…Dales Lost Highway, La Estancia, Record Alley, Red Bard, Village Lounge, Desert Raves, ect ect. I mean don’t get me wrong I love my home, but theres just a big lack of legitimate music venues for upcoming artists to get exposer out here. I find it funny the casinos don’t offer any output as well as many local bars where foot traffic is heavy. As far as the music scene goes what can I say its so diverse here, I think most people aren’t looking to go out and see new artists in odd ball genres like mine, but if you got that black hair dye and scream into a mic, you’ll pick up some attention. Hip Hop music defiantly has an unprecedented following in the Coachella Valley for sure, and I hope it grows as well as the electronic music scene. Its too bad there isn’t any dance clubs where electro, house, and trance DJ’s can perform legitimately out here.
Where was your first show ever in the desert? Who did you perform with? And how old where you? Lets see… it was a freestyle performance show with DJ Alf Alpha at Record Alley in 2004. He just spun records and I made crazy 8 bit noises while dressed up like Ali G. I was 21 and super baked.
Who are some other musicians you have/will collaborate(ed) with? Most definitely, I’ve been collaborating since day one. I’ve produced tracks for Organic Junk Fude (Palm Desert), Panda No Panda (Japan), Rheteric (LA), Dumbfounded (LA), Thirsty Fish (LA), and other members of Project Blowed (LA).
Who would like to collaborate with? I’m really into remixes so anyone who would let me remix their music. I’de really like to find some vocalists for various projects i have going on.
What challenges have you faced as an elctro artist/DJ/band? Exposure is a big one. Creating something nitch or selective can be difficult for people to get behind at first, but i think if i just keep doing what i do, things will either work or they wont. If you end up getting stepped on a little, brush it off, keep going.
Can you tell me a bit about your EPs?
Asterisk 2004 – Asterisk was the first CD, very noticeable samples from nes video games and various other sources.
Slice 2006 – My first ambiguous original album, like Asterisk its mixed as an album start to finish.
Dozer 2007 – B-side tracks and experimental songs that wouldnt fit anywhere else
Super Barrio Brothers 2007 – Los Angeles rapper Dumbfounded and friends from Project Blowed get down over super nostalgic classic NES beats. Search Super Barrio Brothers on You Tube
Racquet Club 2008 – The first official release album available through distribution. After barrio brothers i decided i needed to get back down to the roots and make some dirty electro.
What projects are you currently working on right now?
Untitled EP with Los Angeles rapper Sahtyre
Mustache Ride LP produced by Mac Turner & myself
Super Barrio Brothers 2 with Dumbfoundead +more!
Plus lots of remixes and Singles with new artists
What can we expect from you in the future? Really really hard shit, the kind of music that people will look back and say, damn that was awesome, taking something we all know and love and bashing the shit out it to make something sub real and originally entertaining.
What advice can you give to aspiring young electronic musicians growing up in the Coachella Valley? I think you just have to keep you head up and take criticism as constructive, listen to people make connections and try not to burn any bridges, people will like you music, but the people who can make your music heard take more than a hokey sell. 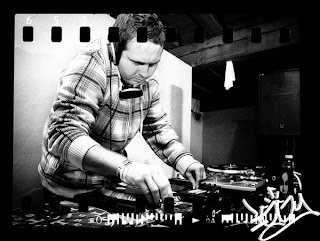 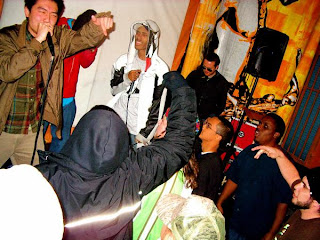 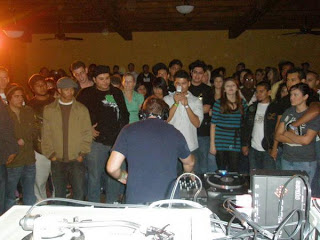 * 8 Bit Bandit laying down the tracks at a local show

To check out 8 Bit Bandit’s music, purchase his albums, check out his side projects and/or booking inquiries please visit: