Let’s take it back…

Wwaayy back – back into time…

In the mid 1970’s hip hop was born in New York. In the late 1980’s, after years of being ignored by mainstream media, hip hop finally got it’s own television show on MTV called “Yo! MTV Raps.” In the early 1990’s hip hop was taking over the number one spots on Billboard’s charts and the hip hop culture was spreading like wild fire all over the entire nation. In the mid 1990’s, across the US, in a small community called the Coachella Valley, the same fire that spread from NY to CA got ahold of a bboy crew called Atomic Styles. Atmoic Styles set fire to the desert and since then, the flame has never died, only grew.
Back in the mid 1990’s, when the Coachella Valley lacked stages, venues, MC crews, DJs and money, the bboy crews stood alone. Making something from nothing (just like DJ Kool Herc did in 1973), Atomic Styles battled on cardboard against other bboy crews at the local high schools and practiced at the Cathedral City Boys and Girls Club. Before the days of heavy promotion on the Internet and Myspace (much like the days before Yo! MTV Raps), to be in a legitimate crew in the hip hop community you had to prove yourself by means of face-to-face battles against each other before being considered a legit artist. The competition was a lot more fierce, and not as “nice” as it is now. A decade later in the late 2000’s, the same fire that was ignited by the old school bboy crews is still alive spreading across the valley at a rapid and uncontrollable speed.
Today, I’m time traveling with DJ Odysey, a bboy turned DJ who was a member of the late Atomic Styles Crew. DJ Odysey will share with me the element of hip hop that first ignited the scene and that is lacking today: break dancing. 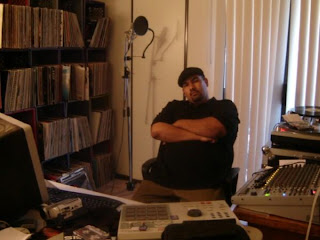 The earliest stages of break dancing, circa 1970’s 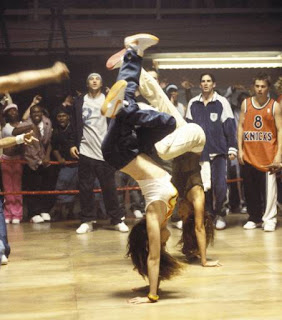 Yes, there are Bgirls too. 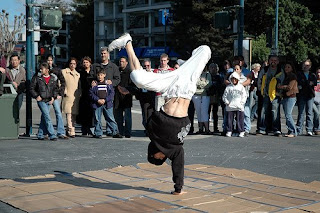 Recycling that cardboard! Photo circa 1990’s.