Let’s take a brief moment and take just a few steps back into time….a time not too long ago, let’s travel back..four years ago to the year 2004.
These were the days before big underground hip hop headliners came to town, before all those stages, before all those venues, and before a huge hip hop community developed. This was when shows around town were in people’s back yards, around pit fires up in the mountains, in warehouses, and/or at some really random spots in the middle of the desert. Before the days of seeing Murs, 2Mex, and Zion I as the headliners for the local hip hop crews around town to open up for. I’m talking about the days when the guys that are on stage now weren’t cool, when they were just those weird underground heads who wore backpacks everywhere they went.
These days, my friends, these were the days before Aesthetic Arrest came to town.
If you are a hip hop head or an electro beat junkie and don’t know who, or haven’t heard of, Aesthetic Arrest then you gotta be sleeping. Whether you have attended one of their shows (which is a huge probability), or looked through your bulletin box on myspace lately (even a bigger probability), their name is everywhere.
But as Romeo and Juliet once pondered, “What’s in a name?” Who is “Aesthetic Arrest”? Are they really people? Or just machines? So, without further ado, I introduce to you two men who have changed the night life of the Coachella Valley indefintely, Mr. Jay Bendar and Michael Bowman…

What inspired you to start throwing shows in the valley in the first place? Our inspiration to throw shows in the valley was really a simple one. We have always had a deep love and respect for music and live performance as a whole. I always wanted to bring the same shit that the rest of the world got to enjoy so readily and easily through the desert. For some reason we were like on a different fucking planet out here. No culture or freshness ever seemed to roll through whatsoever. Mixing premiere artists of all genres who shaped all of our lives so emphatically with the up and coming artists from the desert who could benefit and progress by sharing the same stage with some of their idols, was ultimately the gist of what we were trying to do. We didn’t want to do just local shows. Not that there is anything wrong with that, it just wasn’t what we wanted for our ultimate goal. I wanted to leave a mark and rock this valley like it hadn’t ever been before. We did all of this to try to help put our valley on the map and give our valley a name in regards to event production and within the hip hop community we all love so much. Looking back at it all…..I think we did just that!! Years ago I heard DJ CRAZE say something in a video which I never forgot. What he said was that he didn’t just want to sit and watch the action go on around him and say how fresh it was to be there and experience it….he wanted to know at the end of the day that he MADE that shit happen and was not only involved but was at times the reason shit happened. I really connected with that statement and felt it resonated in me the same exact way. We just wanted to make shit happen and be involved at the highest levels we could with the freshest shit we could.

What are some pluses/minuses to being an event production team?The pluses of being an event production team, is that we get to be involved in spreading information on so many talented artists. Over the years we have also been lucky to meet many other local music enthusiasts who care just as much about vibed out shit as we do.Providing my community with entertainment has really been one of the most gratifying things I have ever experienced in life.The minuses to being an event production team, is that there is often times a lot of politics involved. You also have about every personality under the sun to at some point contend with. The most stressful thing would although have to be the risk involved. I say to anyone….you throw thousands of dollars into the atmosphere on any given night, hoping that it all comes back to you in full at the least. At times would people would stop me and say….man you look real stressed man……well you were right!!!! I was!!
Tell me about the first event Aesthetic Arrest ever threw.
The first event that we as AESTHETIC ARREST threw was in October of 2006. We were set to throw an all ages music festival called the AESTHETIC ARREST MUSIC AND ARTS FESTIVAL in Indio, CA @ La Estancia. With over 20 local Coachella Valley artists set to perform along side SCARUB & ELIGH (living legends), ZION I, CROWN CITY ROCKERS, and DJ DAY. It was lining up to be a banger for sure!! Unfortunately about a week before the event, the City of Indio came in and revoked our permit, thus canceling our event. NOT!! We ended up moving the event to Palm Springs, down-sizing it and re-naming it… “STILL MAKIN MOVES”. It ended up having a great turnout and was a dope night. How many of you remember Scarub and Eligh absolutely killing The Rock Garden?? Tell you what….there was mad energy in there that night!! Prior to that, we had been throwing events in the Coachella Valley since early 2002 under the name IFINNA ENTERTAINMENT (IG2).
Tell me about the night of the biggest event that you’ve thrown? Who headlined? What went down?
I believe the largest show we ever threw in the valley has to have been theMURS show (Nov. 16, 2007 @ La Estancia). We gave out 570 wristbands in total that night and knowing what I know about cats sneaking in…..I believe we were most likely just under 590 or so for the grand total in attendance. It was quite a turning point for us in that it opened a lot of doors to other credible artists who figured if MURS fuxed with us…..then so should they. Crazy thing was even MURS himself had nothing but positive things to say about the valley as a whole in regards to the vibe. I was able to spend about 2 hours with him after the show and his comments were all really exceptional. He even used a clip from our event in his “Better Than The Best” video which was released in early 2008
Tell me a bit about the last show you threw and who headlined?
The last show we threw was on July 25, 2008 @ The Commisary in Rancho Mirage. We brought down QWEL of TYPICAL CATS from Chicago, IL…..actually dood lives in Indiana….but whatever. It’s funny because I have never been a big fan of throwing shows in the summer…mainly because I don’t like the idea of bringing someone down to the desert when it is so damn hot!! That night when QWEL got out of his car…it was like 9 pm and the first thing he said was “Damn it’s like 105 degrees still…that ain’t even right dog”!!! haha. See what I’m saying.I am more of the mindset of pushing the local scene during the summer and allowing it to blossom. I mean shit…we are all stuck in this hellhole together when it’s unbearable …. we might as well work together and advance our scene as far as possible. Tu sabes?
Can you give everyone a clue regarding the next show that you will throw?
Damn. The next show is kind of an open ended thing at the moment. We just feel really content with what we have done to this point. But rest assure, every day, we have offers come across the table from past talent we have worked with, booking agents routing tours, and managers of artists who want to send their talent through our movement. What people want to know is that they are working with someone who will promote and produce the event properly. They want to know they will be treated professionally and that the turnout will, simply put, hit the mark. Once an artist feels comfortable with someone from a particular geographic….they typically will route anything they have through that entity and as well send all their contacts and connections through it as well. What we have done in the past….we will do in the future….provide quality and consistency, not only through elaborate event production and atmosphere coordination, but in all that we do.
Tell me about some other projects that we can expect to see from Aesthetic Arrest in the future?
DIRT. You’ve been warned. “The dirt does not belong to us…We belong to the dirt” 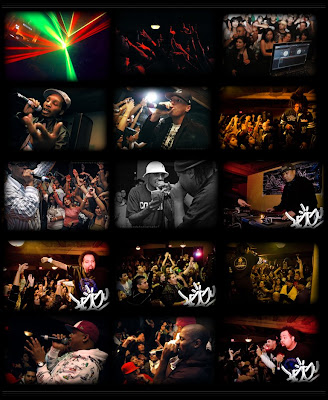 To check them out on the internet please visit:
Their myspace

to check out their current and future project please visit:
http://www.thedirtmag.com/
or
www.myspace.com/thedirtmag