If Meda was a Spice Girl, she’d be Street Spice.

As I round the bases of Hip Hop week on the blog, I touch third base and make the final stretch home. Right off the bat it was DJ Odysey as he gave us an excellent look into the Coachella Valley’s hip hop scene back in the 1990’s. Asethetic Arrest repped one of the many event producers in the desert to bring the scene to life and what it is today. Affiliated was represented in the blog as modern culture with their fashion line that is based out of the Coachella Valley. As Odysey was the breakdancing element of hip hop, AA was the DJ and the MC element and Afiliated was 1/2 of the graffiti art element of hip hop. Coming into home base, I would like to introduce you to the other 1/2 of the graffiti element of hip hop…and that is Meda.
Meda is my pick for Girl of the Week. Meda can not only rep for the present state of hip hop and street culture in the desert, but she also is a peek into the future of what the desert’s scene will be. Meda is not just a street artist, but a beautiful girl who graces the camera with cutting edge fashion, cut throat kicks, and collabs with the toughest dudes in the desert. You may have seen Meda’s stickers around town…on your local Stop signs or her name scribbled on a wall here and there…and wondered, who is that? So now I present to you, without further ado, the maiden behind the mysterious name of MEDA… 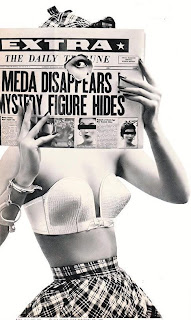 Street Name:
MEDA, with additional add on names such as MEDAface, MEDAtonta, MEDAfetti, etc etc
Astrological sign:
Aquarius “The Week of Genius”
What inspired you to go into street art?
Hmmmmm… Tuffy, from the Muni to the Bart. I saw names all the time. I once was walking to school and saw this huge NORM roller. I think everyone took a quick pause when that saw that. And I’d say that was the event that inspired my love and infatuation with Urban street art. And going to Thunderdome played a good part in my inspiration as well..
Who have been your biggest influences?
My dad. He could draw anything and I used to go under the bed and get his skecthbook to show off his stuff. My mom ‘cuz she was always making something just adding to something to make it look better. Ummm, Mergie (Hushertin). 5th period drill was pretty much hide his deco’s in my backpack because of random security searches. Up north I met one of my closest friends ever, Prints, and I’d never seen someone have so much love for the street and cover soooo much of Chinatown in one night like him. He was a beast in the streets…
What ingredients and tools do you use to wheat paste?
Everyone has a different method, soooo I‘ll keep that to myself, but I’ll just say fuck Golden Harvest…
Describe your first time wheat pasting.
Pretty retarded. I was eating beef jerky like it was nothing and didn’t realize I had the headlights on and nearly ran someone over. All in good days work though…
What’s a typical wheat pasting night consist of?
Having a evening off, which is rare, and having a good partner in crime because the paranoia level goes down when your with someone you trust. And a plan of spots you’re tryin’ to catch too.
Who do you collaborate with?
Collaborate… I’m oner lol… But probably I’d say my mains ekin, hush, afiliated, pinky, CE, planetlunch, friendnando ummm, and few.
What are some of the most difficult obsticles of being a girl in a street art world? What are the pluses?
Ain’t nothing but con’s! It took 2 years to get props and with props should be respect – but nope. It’s more then clear I am not like other girls and yet there’s always an idiot sayin’ some stupid shit to me thinking I‘ma jock him because he’s with some crew or he can hold a can or knows what a OTR is. I hold just about the same knowledge. maybe more then they do, so I tend to always feel disrespected or underestimated. I’m all for showing love and support to something I believe or think is dope, but I hate when people act like they respect me and yet treat me like that “cute girl” who knows nothing. It’s been quiet lately, but the only plus is just seeing a world with a different aspect when most females look over it.
What projects are you currently working on?
Just a bunch of hoopla and nonsense. Nah…I love what I do and I wouldn’t put it out there unless I thought it was dope. I’m actually working on 2 different photo documentary books I have no time when to expect them but I should have a preview to one within the next month or so. I‘d have to say that’s about it… and I guess whatever randomly crosses my mind…
Where can we find your work on the internet?
http://myspace.com/medaoner and when I’m not too lazy I intend on putting my stuff up on flickr: www.flickr.com/photos/medakills/
Any advice for aspiring women in street art?
Never join a crew, don’t jock no one, keep to yourself and just love what you do ‘cuz that’s what its all about. 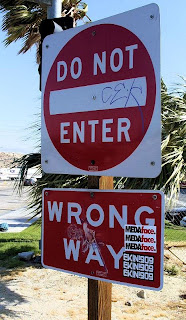 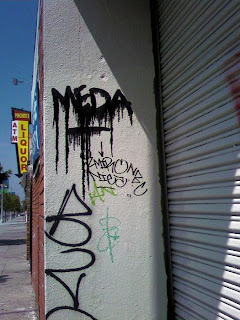 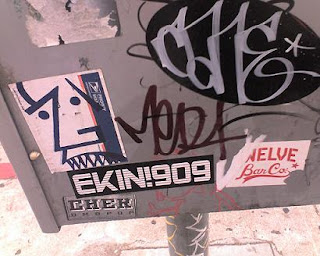 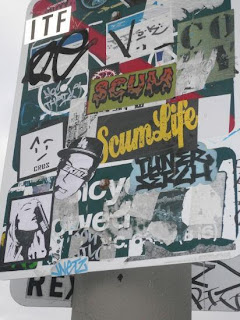 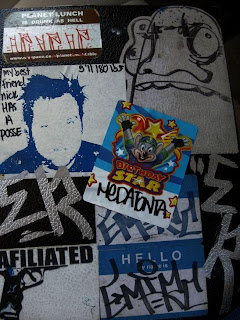