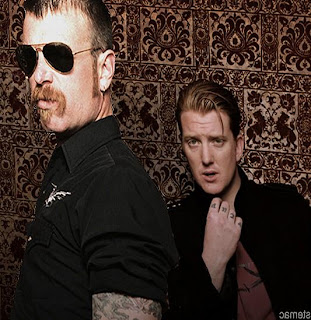 Myspace Music loves Eagles of Death Metal and so does theCVASb.

What theCVASb loves most about the Eagles of Death Metal is that they were born, bred and bundled together right here in the Coachella Valley. Eagles of Death Metal’s original and current members consist of two men, Joshua Homme and Jesse Hughes.
So, after I saw this on myspace the other day, I thought I would share the inspiration with everyone else in the valley. It was really cool to hop on the Internet and see some fellow Coachella Valleyians sharing a bit of the desert’s charm with the world. Right on, you guys. Also, I hope this posting encourages everyone out there to do a little desert music history and see how these how these CV artists came up – in a big way.
Check it out!:

A little history on the members of Eagles of Death Metal:
Joshua Homme was born in Joshua Tree and was a founding member of the CV rock band Kyuss, as well as the founding and only continuous member of the hard rock band Queens of the Stone Age, in which he sings and plays guitar. He co-founded and occasionally performs with Eagles of Death Metal as its drummer, and continues to produce and release a musical improv series with other musicians, mostly from the Palm Desert Scene, known as The Desert Sessions.
Jesse Hughes, was born in Greenville, South Carolina by came over to live in Palm Desert when he was 7 years old. After he adapted/converted to a “desert rat” at a young age, he met fellow band member and Joshua Homme in high school and the rest was history. Today Hughes is the front man to the band, Eagles of Death Metal and has been said to frequent the Record Alley in the PD mall whenever he is home.
check out one of their music videos:
check out the EODM live at Coachella in ’06 (i was there and was loving every minute of it):