Let me introduce Blue Rider to you.
Blue Rider introduced himself to me not too long ago. He approached me with an idea that he wanted to bring to fruition and has been moving right along in his process.
He is looking to start a compilation of independent music produced by artists in and around the Coachella Valley. But, mind you, Blue Rider is not a record label. He is simply a man with a master plan to publish a compelling CD. Very DIY in his demeanor, Blue Rider is on to something that could really be something. 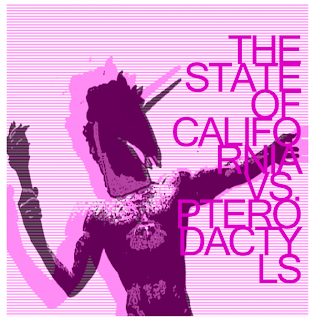 Label: None (independent) Recommended Song: Inebriated Cosmetologist
Website:myspace.com/pterodactylsbiteback
Pros: The song writing is solid, with lots of hooks and enough edginess and unconventional builds and tempo changes to keep listeners interested, not to mention some very unique guitars sounds.
Cons: The somewhat tone-challenged vocals give credit to the genuine angst that drives the band’s songs, but can also be a little distracting.
Review: Loud drums + piano pounding + edgy guitar + catchy tunes = Pterodactyls’ EP, The State of California Vs. Pterodactyls. Their songs are edgy, driving, and catchy. With half-shouted-half-sung vocals (aka The Ramones) the lead singer’s voice has the personality and drive necessary to lead the way as they bang through their delightfully catchy songs. I congratulate guitarist some very unique guitar work. I love to hear more un-conventional sounds coming from the instrument that is now becoming more and more endangered in post-modern music. Pterodactyls are definitely worth checking out. 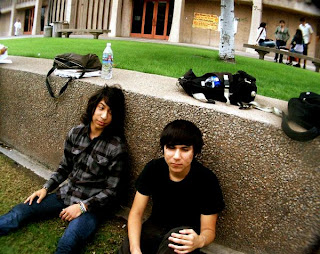 If you like the sound of the Pterodactyls, then make sure to check not only them as a group, but also their individual projects this Friday at The Center.
Cutie pie, Bolin Jue, will be debuting his solo project, myspace.com/bolin.
Dandroid, the solo act, will come back into the mix after a two years disapearing act as well.
Carlee Hendrix, a past Girl of the Week, will also be beforming one of her projects, Faces Faces.