He has a sweet face, ladies. But don’t let that fool you.

J.A.H. is fierce.
J.A.H. and his art crew, Sky is Falling Art Kult, have been beautifying the valley one day at a time. Whether you have realized it or not. A little here, a litter there, and wah-laa… like magic their art has gone from the streets, to murals in the community, to the gallery.
The Sky is Falling’s most recent project is an Opening Reception tomorrow night at Janssen Art Spece in Palm Springs. If you haven’t heard already, the theme of their works will be centered around their depictions of a what a “modern day woman” is.
Of course, I took interest to this theme. Being a self-proclaimed “modern day woman” myself, I was naturally curious as to what the Sky is Falling Art Kult was going to come up with.
And in being the modern woman that I am, I responded to a bulletin posting of a promotion on Myspace.com to the “An Ode to the Modern Day Woman” flier that J.A.H. had posted. I asked him if he wouldn’t mind sharing with the valley a little more about the show than just a flier.
So, without further ado, I present to you, the modern man’s hustle… 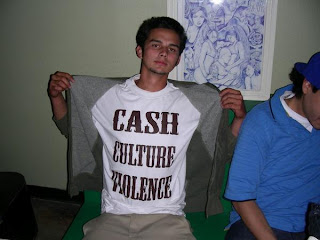 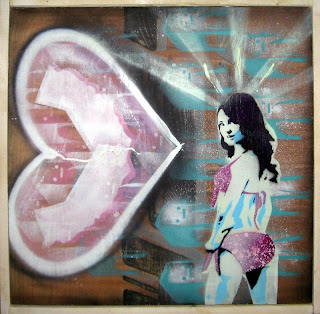 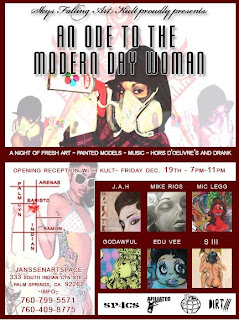 Hope to see you there….