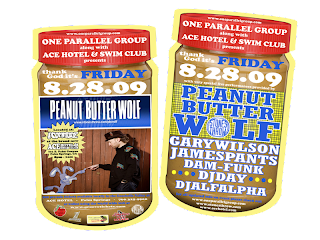 ‘Twas the night of the 28th…
Daytime temperatures had hit 115 degress
Come night fall, they only dropped only only by 20-15.
It was one of those nights…
one of those real desert nights.
It was the perfect way to welcome the LA record label, Stones Throw.
Welcome, to the desert.
You would think that the high temperatures and the unexpected humidity would faze people. But, nahhh….
It’s an honest to statement to say that, perhapse, the odd weather just brought out all the die hards. All the people who are really down to get down, regardless of risking the inevitable pit stains, sweaty foreheads, limp hair, and dehydration. Mix all those symptoms in with Ace Hotel’s strong drinks… and whalaa…. you have a night to remember.
Party started as soon as the young desert native that everyone has their eye out on, DJ Alf Alpha, hit the tables around 9:30pm.

We all know, Alf Alpha is an eclectic DJ. On this night he spun some true, west coast, LA hip hop. People were crip walking. You don’t know how happy I was to see that. Alf Alpha tore it up on the tabeles, no diggity no doubt. Wish I got some photos of that, but, unfortunately, I only got some of the lovely people who were enjoying the set…

James Pants was feelin’ it

She was grrovin’ to Alf Alpha jams…

word up to DJ Odysey for helping out with the needles

Calling his friends, giving the address to the spot…

This guy featured in the photo was the one crip walking…

DJ Day cutting it up at Ace Hotel Palm Springs from TheCV ArtScene on Vimeo.

People were loving it. As more and more people trickled in…

the drinks started to flow…

which, was perfect, because Gary Wilson was to be up next…

… and you gotta be ready for Gary Wilson.
As DJ Day continued to kill it on the two turntables, Gary Wilson’s band took stage. It was a swift transition.

DJ Day had everyone right where they needed to be, right before witness the dopeness. Well, dopeness to some, confusion to others. And art to others. Something different to everyone I guess is more safer to say….

(gasp!) Mary, how could you?
On the plus side, the band wasn’t too fazed by it all…

Gary, was Gary. The music, was amazing.
Some people were a little shocked.

And some got it.

When gary was finished, the crowd went wild. It was bad ass. It was a little bit of performance art mixed in a with some funky rhythms. Dope!
Next up, same band, different combo… James Pants!!
Side note: It is safe to say that I have listened to James Pants’s album all the way through more than 10 times. It was on repeat in my car when it first came out in ’08. I saw him a while back at Turntable Lab in LA for his album release party… he let people screen print James Pants logos on hospitals pants. Needless to say, my pants somehow caught on fire under the heater and the whole party had to be evacuated from the room that night! It smelt horrible for the remainder of the party. Off topic, but yeah… James Pants if you are reading this… sorry about that party foul.
But, no need to worry, no party fouls at this party.

James Pants has some shiny pantalones!..

and shiny drum machines!
As James Pants finished up their set, which, was amazing BTW, I realized that I had gotten a little tipsy. Ace Hotel really doesn’t play with their drinks! They serve their drinks strong.
So strong…. that when I attempted to take photos of people dancing to James Pants… all I found on my camera were boobs shots from all the ladies. Featured below are the NC-17 rated ones.
Party foul???… Again?… damn.

As James Pants took their final bows and exited the stage, the headlining act of the night, Peanut Butter Wolf, enetered.

The entire set up, the huge projector screens on each side of the elaborate stage, were all for Peanut Butter Wolf. If you didn’t already know, PBW is not just famous and respected for running a successful record label and DJing, his is also loved by the masses for his VJ (video jockey) sets. As Peanut Butter Wolf plays each song, we can visually see the music video and the mixing of the two songs as he plays. It’s amazing, and really only something that can be explained in person or at the show. It’s definitely the future… or what I hope the future is to be. Basically, it’s that next level… and everyone that was there that nigh took it to the next level…

As soon as Peanut Butter Wolf took over the tables, the crowd exploded.

A breakdancing session broke out!

Alf Alpha even showed off some of his old skool moves.

After everyone did their thing, the crowd got closer and got their groove on.

It was an amazing night!
So much fun!
The crowd left home with everything they thought they would…
arm pit stains, sweaty foreheads, limp hair, dehydration…
and a slight hang over in the morning from too much the night before.
Thank you to everyone who made it happen…
www.OneParallelGroup.com
www.AceHotel.com/PalmSprings
artists:
www.StonesThrow.com
www.myspace.com/pbwolf
www.myspace.com/garywilson64
www.myspace.com/jamespants
www.myspace.com/djday
www.myspace.com/alfalpha
photography help from:
www.fivethousandphotography.blogpost.com