The Something From Nothing Party Recap 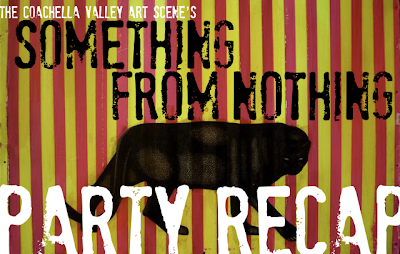 Let’s start with the concept for the party. The Mission Statement, if you must.
“Something From Nothing”
What?!? Well, we chose this as the party theme for many reasons. First one being that we started this blog, The Coachella Valley Art Scene, about a year and a half ago. And we started with no money, no fancy computer, and nobody told us to do it. We just did it. And we did it for free. And it came from our imagination. And we have been going with the flow ever since. So, in a sense… we created something from nothing. Ya feel me?…
Also, often times, artists do art, make art, get inspired by art when they have nothing. They take the resources that are around them, soak ’em up and spit ’em out with their own twists, turns, interpretations, and style.
And let’s not forget that the party was held at the awesome, SCRAP Gallery. An art gallery that is for the environment. It’s a great place for people to come and create art from trash, recycled, and reused items. Essentially, encouraging all who create to make something from… you guessed it, nothing.
From our theme we then set out to expand upon the idea…. and with that an art show, a stage, a skate ramp, a screen printer, an arts and crafts station, a swap meet, and much more came to fruition.
And this is where the story begins…

Coachella Valley Art Festival: “Something From Nothing” from Glen Coy on Vimeo. 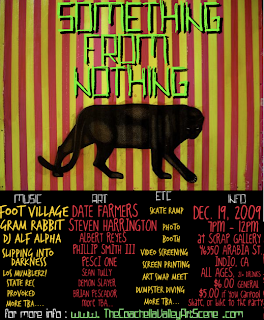 This was the official, non-online flyer. These were fabric flyers that I put all around town. I screen printed these on old t-shirts. They were pretty rad. If you want one, email me. I still have a few.
– December 19, 2009 –

‘Twas the night of the party… and all through the valley… not a creature was stirring, not even a mouse..”
Okay, just kidding. But really, it was the evening of the party and our hearts were pumping. We were really excited to share all of our hard work, cool art, and skate ramp with you guys.
Pictured above is the venue. That cool looking, Twinkie-looking, warehouse.

Party started at 7:00pm. But people were already lining up around 6:00pm. It was pretty rad. We opened the doors and directed traffic.
SCRAP Gallery is so big, we needed North Pole and South Pole signage!
As people were filtering inside, Alf Alpha played the funky jams…

Outside people were feeling the funkiness that Alf Alpha had pumping from the speakers. I ran into a bunch of old friends, new friends, artists, community leaders, teachers… it was a GREAT crowd. And a great vibe.

The skate ramp was in full effect the entire night. It never stopped.
Big thank you to Epidemic Skate Shop for donating the coping.
And to Adrian Ibarca for donating the wood and building the ramp with his own two hands.

Also, Eye Skate Shop set up a booth, brought their team showed off their latest gear.

Did everyone get to check out the Low Riders outside? They were to next to entrance #1. They were pretty gnarly.

The Low Rider squad. Thanks for coming out guys.

We had the friends and family of California Soul come out and make dream catchers. It was really cool to see people pull up a seat, meet new friends and make cool art. A little take home present…

We had some art swap meet action going on. Featured in this photo is Peetrik’s clothing line and other random items for sale.

And then we had our screen printing machine that made the FIRST EVER Coachella Valley Art Scene t-shirts!!! It was a huge hit. We sold the freshly pressed shirts for only $7. Can’t beat that. We’ll be selling them online starting this weekend, just in cased you missed it. Oh, and side note… the screen printer was my Dad!
So as everyone was making crafts, screen printing their shirts, they were also checking out the art…

a lot of people were really digging Steven Harrington’s prints…
…. check out some of the art that was there that night…
The Date Farmers

Demon Slayer was in the house…

Carlos Munoz was on the wall opposite to Phillip Smith III.

Kylie Knight was to the right of the Date Farmers.

ANTA where you at?

Forest Vasquez. He’s only 16. Keep doing your thing Forest! We can dig it.

There were also many sculptures in the gallery that SCRAP Gallery guests created.

But… as you know… in addition to the art, the crafts, the screen printing…
there was the music.

Alf Alpha continued to hold it down, cutting it up during the hip hop sets and set the mood inbetween

Pimpin Quinn made his first ever debut.

Speak and Pheo killed it. Some say it’s their star power. We agree.

Los Mumblers! up next…

The Indio natives held it down… great job Mumblers

Alf Alpha… still mixing it up! He really didn’t stop.
Slipping Into Darkness then took the stage…

Slipping Into Darkness always put on a solid, good show.
Next up was the highly anticipated, Rabbit & Rutherford of Gram Rabbit.

They are super rad. And they had a fabulous following…

no, but really, who doesn’t love these guys?

Thank you for coming out Rabbit & Rutherford. We loved it.
The party then got shifted to outside where we had punk bands, State Rec and Foot Village close the night out.

The headlining act of the night was Foot Village.
There was very little of this performance documented. But, trust me that this band rocked the joint. It was a great experience and a perfect way to close the night.