They are a beautiful family that resides just up the grade from the Coachella Valley, in the Hi-Desert. Each of them are talented, adorable, raw, real, and full of soul.
In a short amount of time after deciding to join forces, this band has taken the Hi and Low Desert by storm. Making it rain at Pappy and Harriet’s on a regular basis, spreading the warmth of the Southern Californian sun with their tour in Hawaii, and they soon will shake up Los Angeles with an upcoming show at Whisky A Go Go in March. This Saturday the Evaros will perform a special set at the Doo Wop in the Desert party in Ace Hotel/Palm Springs, CA.
When the concept and idea of the Doo Wop in the Desert party first came to the table back in December, the first, and only band we could think of to be the house band for the night was Evaro. Give them one listen, and you will hear why. Our personal favorites are their harmonizing ways, their vintage feel, and their interactive and theatrical stage presence (often encouraging their audience to dress in themes along with them when they perform). It was practically love at first sight.
But, before we jump right into the love scenes, we must first build the story and give you the history. The Evaro family, is a family of talented musicians. Those my mother’s age (around 50 years old), may recognize the name Evaro from the popular family band from “back in the day”, The Evaros. The Evaros made name for themselves in the desert when they were signed to Motown when some of the members were only in their teens and continue to live their life as professional musicians to this day. But it doesn’t stop there, the family history of Evaro band goes back even three more generations. You wanna talk Doo Wop? The Evaros can definitely walk the walk.
This weekend we are really happy to share the experience of bringing our generation of Evaro to the stage Saturday night.
So, without further ado…. the family, the fame, the five stars will now take the stage…. E V A R O !!… 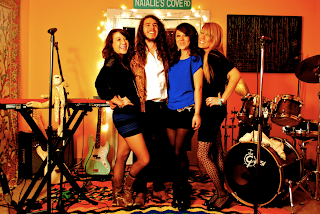 Name of members in the band:

The last name, Evaro, has some old Palm Springs history. Can you tell us a little bit about that? The record label your family was signed to? The shows that they played?

Evaro music spans five decades from the 1950’s to the present. The Evaro’s have performed national and international moving people from all different cultures with their unique sound. The Third Gereration of EVARO’s were signed to Motown Records in the 1970’s. The Evaro’s credits include: T.V. shows such as: The Gong Show, radio, opening up for bigs acts such as: Three Dog Night and Steppenwolf, T.V. commercials, newspaper articles, magazines, 16 magazine, Billboard, The Hollywood Reporter and Honorees of “The Palm Springs Walk of Stars”. The Evaro’s consist of and incredibly musical talented family, professional vocalists and musicians that put on an extraordiary performance. The Evaro’s have since gone on to fulfill all of their individual endeavors. Our Father, Gene Evaro, who was 13 around the time of being signed, went on to write songs for major motion pictures such as: Arnold Schwarzenegger’s Total Recall, Robert Di Niro’s Jacknife, MirrorMirror, and Lambada..He has since been signed with Sony Latin as a producer and songwriter.

So, tell us the story of how your band formed.

We began to play music together in the winter of 2008 once moving back to the desert following the death of our sister Natalie Evaro who tragically lost her life in a car accident in Nashville, TN. After considerable downtime and mourning, we came to the conclusion that the only true way to heal and express ourselves, was the one way we knew how, music. The abrupt success of our band has inspired the progress and appetite to create and evolve as a band.

How would you describe your sound?

What do you like your audience to take from your music/your show?
Pride & inspiration. The satisfaction that can only be realized when intimate with pure, undiluted music & love… An experience, a memory.

How would you describe a typical night out with the Evaro?

What can we look forward to hear from the Evaro at the Doo Wop in the Desert?

Funky old school favorites…along with some of our original tunes

We want Hippies in polyester & we’ll give you STAR magazine.

Tell us about some upcoming shows you have planned…

On Saturday March 6th EVARO will have their first big show in the city at The Whiskey a GO GO In Los Angeles.

Were also playing another show at the historic Pappy & Harriets Pionneertown Palace in Pioneertown, Ca on Saturday Fenurary 20th.

Our latest and greatest addition to our upcoming shows is our spot on Saturday May 15th, at the eighth annual Joshua Tree Music Festival.

as well as preparing for another tour of the Hawaiian islands for the fall. Stay tuned for updates & more!

What new music projects do you have going on?

EVARO has just relocated in the high desert, and finished settling in, in our new beautiful desert casita with brand new recording studio…

We are currently recording new songs/video’s

How can we show some support?

Vote for EVARO on KTLA’s Battle of the Bands. Vote EVARO!

If we want to listen to you online, become a fan, where should go? What are your internet addresses?

If we want to book you for a show, who and what do we contact?

Catch Evaro at Doo Wop in the Desert this week in Palm Springs, CA….