INTERVIEW: Guy Blakeslee of The Entrance Band
with Steven Preston of the Coachella Valley Art Scene
This Saturday The Entrance Band will return to the desert with fellow California psyche hooligans The Growlers. I spoke with TEB Singer/guitarist/visionary Guy Blakeslee about touring, and the power of Psychedelic music. 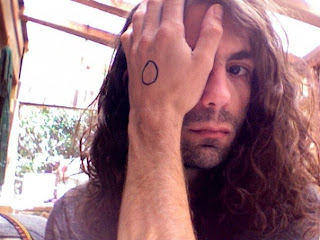 Steve Preston: Saturday’s show will be Entrance Band’s 3rd time playing Palm Springs in the last 6 months, what’s been your impression of the desert?

It’s definitely been really fun, theres definitely a lot of rad people out there it seems like and good bands, like Slipping Into Darkness is a good band that we played with there, yeah we’re excited, it’s a good way to end our tour for sure. 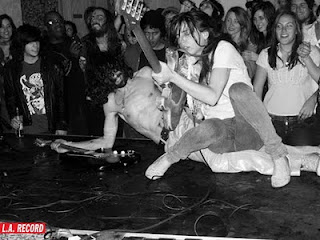 SP: It seems like you have been doing a lot of touring lately, your live show is pretty impressive, is it hard to recreate that energy on a nightly basis?

GB: I wouldn’t say its hard, its grueling but its not difficult, like its exhausting but its easy, if that makes sense. We’ve been touring most of the past year, probably more than half the time in the past year, we finished playing a bunch of shows last night and I have a few days before our next show, like I feel pretty zonked out, but I think theres an adrenaline aspect to traveling as well as performing that keeps you in the zone while you’re actually doing it. It’s been really good for us to tour a lot this year, you know get really into our own rhythm of being on the road and playing in different places every night. Ultimately it gets easier to pace your energy if you do it a lot. Like sometimes if we don’t play for a while and then play a show I lose my voice right away, where like I could scream every night for a month and always have my voice, cause its getting used.

And its been really cool to tour with The Growlers, they’re a really great band, they’re a lot of fun to travel with, we’ve been really psyched to play together and see each other play every night. That’s another good element to this show and this tour is we’re all having a pretty rad experience because of each others music and good company. It’s like every show is a celebration; every night of the week.

SP: You guys have played a lot throughout California in the past few years, how has it been going out on the road and touring the rest of the country?

GB: It’s been really rad, It’s been our goal all along as a band to take our music everywhere. You know California is the best place to be I think and the best place to play, but people in other places they need people to come and bring art and music and stuff to them in a lot of cases, and its good to go and connect with that instead of just staying in a California space bubble.

But we’ve had really interesting experiences just traveling and playing throughout the country. That’s what I’ve been doing for most of the past 10 years but doing it with this band has been pretty intense for the past year and half.

SP: A few years ago you released the Live Bootleg Series albums, as you’re growing as band how do you keep the DIY spirit going?

GB: Yeah we’re probably going to do more of those soon, we still pretty much do everything ourselves so it’s not hard to keep that going. We’ve been doing everything the past 2 years with a label, but we don’t have a label anymore right now so we’re definitely back in the DIY zone right now, we have total creative freedom to do whatever we want, just have to figure out how to make it happen. We’ve been traveling around with the support of a record company for the past year and that’s definitely developed our band and our ability to tour and stuff, but the tour that we’re doing right now we’re doing on our own with out any promotion or anything, its all totally grass roots.

We went through a weird major label cycle, like 1 round of being on a major label, now we’re just gonna be a punk rock band again.

SP: It seems in recent years there has been a real west coast psychedelia movement come back, with the Folk Yeah family of bands, and The Growlers who are playing with you on Saturday, a band like Golden Animals who has spent time in the desert, how do you see Entrance Band fitting into that?

GB: I feel like we’ve been a part of that from the beginning of it starting to happen, in the past few years. I think it’s a really positive vibe, there’s not really any unifying sound that any of these bands have there’s just a shared attitude & consciousness that makes everything jive together you know. I think its really rad for sure. That’s one of the things, I used to play as Entrance by myself, and I really wanted to have a band for a long time and knew who the people were that I wanted to play with, it just took us a while to get it going, the band with the 3 of us playing together is so much more of a vehicle for bringing people together and stirring up energy. Theres only so much I can do on my own, but we’re like, I think we’re a pretty powerful combination, I think that’s definitely been apart of the whole, for us at least, the whole experience of participating in a growing, grass roots, California culture we’re so much more able to be apart of that as group than any of us would be as individuals. And that’s the cool spirit of the whole thing that its about coming together and joining forces. For instance we’re able to get a lot of people to dance because we play electrified rock n roll music, but like I couldn’t ever really do that on my own, like stomping on the floor. And then when people start dancing together and they never met and they start talking to each other, that’s the kind of energy that actually brings people together not like sitting and listening to someone like in a café where you have to whisper. There’s something about the communal spirit of rock music and people playing loud together and people dancing, like a really primal connection between people.

SP: It seems like there is a musical, spiritual revolution going on, people don’t want to just listen to Entrance Band, people want to experience Entrance Band.

GB: I think that we all approach performing in a spiritual way, in our own personal like we don’t share it, we don’t talk about that, we don’t share the same method of that or anything, its not a culty kind of spirituality, but I think we all just like individually, performing especially for us is all about tuning in to some like other world or some like higher force and like channeling energy and like working with the energy in a space to react and create something new you know. I think we’re all lucky to find people to play with that are of similar head space. I don’t know if we could really play with anyone else.

It’s much more unspoken, the spiritual aspect of it, like all of us, like all really dedicated passionate performers are in a way, even if I don’t like what they’re doing, if they really believe in what they’re doing and are really trying to transcend with their energy in some way, there’s an aspect that’s like shamanism. Rock n roll in its really days was full on shamanic rituals. Jerry Lee Lewis, Little Richard, or Elvis, they just stirred up an insane frenzy of wild psychic sexual energy among all these teenage kids by just like channeling some like crazy other worldly vibes you know.

In a performance I have to go as far as I possibly can into some kind of other state of mind, that’s kind of what the name of the band is, The Entrance Band, the En-Trance Band, and there’s definitely a trance aspect to performing for me, where by being completely present in the sound, I try to go into another world essentially and be sending the sound back from this other dimension, basically, and that’s like a modern like amateur version of shamanism, so I dont want be like say im a wizard or a shaman or a medicine man or a magician or something. But for me the actual experience of playing is going somewhere and sending something back out to people from like a place that they are not in that I’m in.

all words by Steven Preston

this SATURDAY in downtown

Also, we will be documenting the night! Taking photos, taking video, writing notes…
So, make sure you look fly as hell.
And don’t do too many drugs, your face looks weird sometimes when you do.
See you there.