This Friday The Ghost Channel presents a great show starring David Liebe Hart & Adam Papagam, Mississippi Man, War Drum, and The Antelopes at The Oasis Bar.
To get a better sense of what one of the returning band to the desert is all about, Abry Alday of Indiewin.com picked Mississippi Man’s brains for a bit.
Of notable mention: David Liebe Hart & Adam Papagam are also returning to the desert for some chaos. War Drum and The Antelope are desert natives.
Show is at the Oasis Bar, is 21+, and is five dollar$ to get in. Starts at 9pm, so don’t be late. 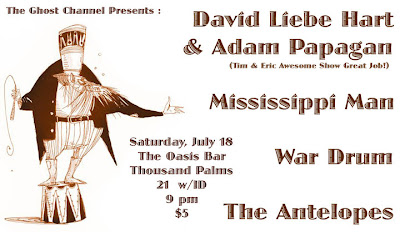 via: Ambry Alday of Indiewin.com

Indie Win is proud to have Mississippi Man connect with us for an interview! This five member band with the names of Mumbles, Grumbles, Fumbles, Stumbles, and Crumbles have a sound rooted from the deep south.; which is just a tad bit different from what we westerners, or whatever root you are, are accustomed to. But it is a sound that no one will ever forget! To get to know more of Mississippi Man, Editor Ambry Alday had a chance to talk with them.

Ambry Alday: So I know that its been awhile since you guys have been in the desert, what brings you back to perform your music here?

Mississippi Man: We have been coming to the desert, specifically Joshua Tree, since the beginning of the band. We have 10 acres of property in the middle of nowhere that we record demos at and just relax. To play shows in the desert is just a big bonus to coming out. There is definitely a huge connection that we feel with the desert that we don’t get elsewhere.

AA: Well I’m glad to hear that about our desert, especially coming from you! So, I am going to take it back for a little bit, but how exactly did you guys get together to form Mississippi Man?

MM: We were all part of different bands that allowed us to meet and become friends and when those bands didn’t work out, the logical thing to do was form this project. After we first played together, we knew it was something we should do.

AA: That’s great! I am actually also wondering on how you guys formed the name “Mississippi Man” for the band?

MM: We all have a huge thing for numerology and especially with the number 23. Mississippi Man isn’t named for the state but rather the state of mind that the number evokes. Do the numbers and you will see 23 in our name.

AA: Oh wow! Very smart! [laughs] So what were your guy’s greatest influences in making music and becoming Mississippi Man?

MM: We all come from different backgrounds in music and all have vastly different influences. We found common ground in old pop music and some folk and just went from there. We’ve already evolved a lot from our EP which was more folk to our upcoming full-length, “A-OK,” which is much more modern indie/pop music.

AA: Did you guys strongly believe that you would be creating music for hundreds of fans to listen to your music till this day?

MM: We definitely felt the chemistry that we all had after the first time we jammed together and after we wrote our first song, we definitely knew that we could go places with this band. We are really glad to be playing music to a lot of people and grateful to all of our fans.

AA: What do you think would have been your fall back, if your music wasn’t as well known as it is today?

MM: I don’t think that any of us could be doing anything else. We are completely dedicated to our art and I doubt that has ever been a real question for us. We just knew that this was it and that we were meant to do this.

AA: It definitely shows that music is what you guys should be doing! So in your opinion, which song took the most effort out of all you guys in order for that song to be perfect?

MM: “Mountain” is definitely the song that went through the most changes to get to where it is on the album. We toured that song for over a year and we never felt that it was quite right until a few months ago when we started recording. Some songs seem to write themselves and others take time but we’ve found that you just can’t rush an idea; it’s time will come on it’s own.

AA: Is there anything you want your fans to feel emotionally from your music?

MM: There is really no way we want people to especially feel. I think that this album is pretty positive and carefree but there are also darker elements beneath the surface so I think that it all depends on the person listening.

AA: So what do you think makes your music so different compared to other indie artists out there?

MM: I think that there is a huge Renaissance in good music right now. A lot of bands are coming out that write really good songs and we’ve had the pleasure of playing with a lot of great musicians. The thing that separates one band from the next is how well they can put themselves into the music and how well a band can put emotion into songs and not make them sound contrived.

AA: Other than your guy’s track, what is a current artist/track that you believe is your favorite at this moment?

/ / all words by Ambry Alday of indiewin.com